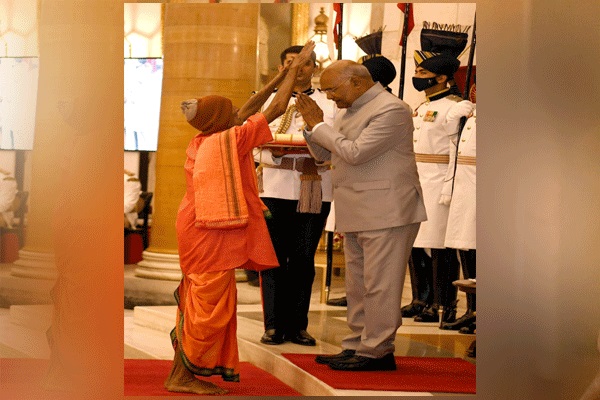 Bhubaneswar: Heartfelt condolences poured in from across the State as well as country for veteran teacher Padma Shri Nanda Kishore Prusty.

Expressing grief over demise of Nanda Kishore Prusty, Prime Minister Narendra Modi said that the country will always remember the noble soul for his efforts to spread education in Odisha.

Pained by the demise of Shri Nanda Prusty Ji. The much respected “Nanda Sir” will be remembered for generations due to his efforts to spread the joys of education in Odisha. He drew the nation’s attention and affection a few weeks ago at the Padma Awards ceremony. Om Shanti. pic.twitter.com/VUpyPWP9FP

“Saddened to hear the death of Padma Shri award winning teacher Nanda Kishore Prusty. His valuable contribution to education and his lifelong sacrifice will remain ideal forever. I extend my heartfelt condolences to the bereaved family,” Patnaik wrote.

Deeply saddened by the demise of Nanda Kishore Prusty Ji. He was recently conferred with the Padma Shri for his pioneer contribution towards providing free education to the children in Odisha. Nation will always remember this noble soul for his selfless service. Om Shanti Shanti pic.twitter.com/w5DOKYydic

Mourning over death of the teacher, Union Minister of Education and Skill Development & Entrepreneurship said that departure of Nanda Sir is an irreparable loss for the State as well as country’s education.

“I am saddened by loss of Padma Shri Nanda Kishore Prusty. The demise of Nanda Sir, who had been teaching little children for three generations without pay, is an irreparable loss not only for Odisha but also to entire education field of India,” Pradhan wrote on his Twitter handle.

Nanda Sir (Nanda Mastre) passed away this afternoon at a private hospital in Bhubaneswar after battling for life against COVID-19. He was 104.

Centenarian Nanda Sir, a Class 7 pass out who had been teaching children and elders around his home at Kantira village under Sukinda Block in Jajpur district, was awarded the Padma Shri, India’s fourth highest civilian award, for his contribution to education. He had kept the tradition of ‘chatashali’ (a non-formal school for primary education) alive in Odisha.

On November 9 this year, he had received the prestigious award from President Ram Nath Kovind at Rashtrapati Bhawan, New Delhi.