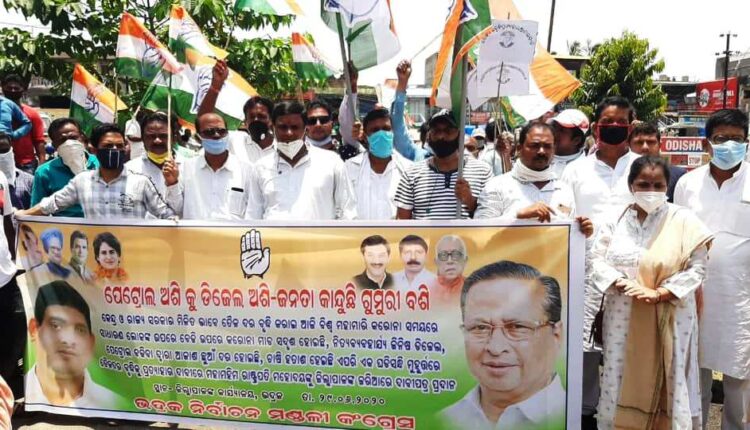 Bhubaneswar: The Congress Odisha unit staged a demonstration here on Monday to protest “unprecedented” increase in the prices of petrol and diesel and demanded immediate rollback of the hike by the BJP-led government at the Centre amid the COVID-19 crisis.

Party workers, led by state Congress President Niranjan Patnaik, held a silent sit-in near Raj Bhavan and sent a memorandum to President Ram Nath Kovind seeking his intervention for quick rollback of the hike in fuel price for the interest of the people who are hit hard by the pandemic.

During the last three-and-a-half months alone, the Narendra Modi government has increased the price and excise duty on diesel by Rs 26.48 per litre and on petrol by Rs 21.50 per litre, Patnaik said, adding “this is nothing but exploitation of the people who are facing serious financial
hardship due to COVID-19 pandemic.”

In their memorandum to the President, the Congress leaders said repeated and “unjust” increase in the prices as also Central excise duty on petrol and diesel over the last three months has inflicted insurmountable pain and suffering on the people.

“As the country faces unprecedented health and economic pandemic, the Modi government is profiteering from the misery of the people by repeatedly increasing prices as also excise duty on petrol and diesel,” it said.

Final-year examinations in varisties will be conducted by…

“Since the lockdown was imposed around three months ago, the extent of extortion and profiteering by repeated increase in prices and excise duty on petrol and diesel has surpassed all forms of exploitation,” the party memorandum said.

On March 5, the price of petrol and diesel was increased by Rs 3 per litre, while the Centre on May 5 hiked the excise duty on diesel by Rs 13 per litre and on petrol by Rs 10 per litre, it said.

Since June 7 till June 24, the Modi government has consecutively increased the prices of petrol and diesel leading to a further increase of Rs 10.48 per litre for diesel and Rs 8.50 per litre for petrol, it said.

While the crude oil prices have gone down over the last few months, the fuel price has sky-rocketed in India as the government seeks to fleece the people, the Congress leaders claimed.

The Congress leaders urged the President to direct immediate rollback of the hike in the prices of diesel and petrol and excise duty since March 5 and pass on the benefit to the people in these difficult times.

COVID-19: Another 262 patients cure of disease in Odisha