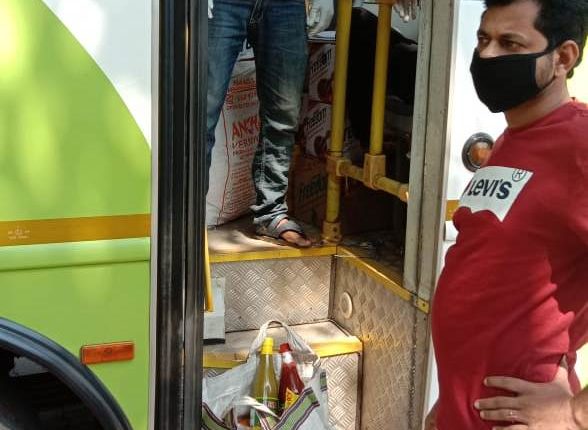 In collaboration with the Capital Region Urban Transport (CRUT) to fight the COVID-19 situation BMC under the leadership of Municipal Commissioner Prem Chandra Chaudhary, the civic body today deployed two Mo Buses in containment zones of Surya Nagar, Bomikhal and Jharpada. The buses carried 8 to 10 vendors each with vegetables, fruits and groceries.

The buses went to the central locations of each contaiment zone where the announcement was done by the staff of BMC marketing wing through public address system.

The locals came to the buses and purchased the essential commodities from the vendors from Mo Bus. However, all measures were taken to ensure social distancing parameters as per the SOP announced by the State Government.

Distribution in other areas

The deployment of Mo Bus for distribution of essential commodities in containment zones and eight small trucks in other areas were carried out under the active supervision of BMC Additional Commissioner Abanikanta Pattanaik and Deputy Commissioner (Land) Kamaljit Das.

Constable walks for 450 km to join duty amid lockdown