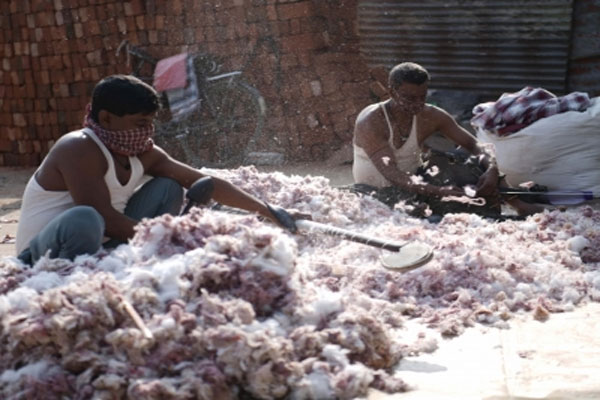 New Delhi: The All India Kisan Sabha on Thursday condemned the “unilateral decision” of the Narendra Modi government “at the behest of corporate textile companies” to exempt all cotton imports from customs duties from April 14 to September 30, claiming that it would lead to inflow of cheap foreign cotton.

“Cotton imports were being taxed at about 11 per cent, including cess and surcharges, in India. This move comes without ensuring assured remunerative prices and procurement of cotton grown by farmers in India. It is likely to lead to an inflow of cheap cotton from China, Brazil, United States of America and other places,” the AIKS said.

It also warned that in the absence of an effective procurement and a Price Stabilisation Fund (PSF) to ward off adverse impact of such inflow on prices, this could lead to a further burden on the crisis-ridden cotton farmers in our country. “It should not be forgotten that the cotton-belt in India is having the highest number of suicides by farmers in distress,” the AIKS said.

The Centre claims that this decision has been necessitated to help the textile industry cope with the raw material shortages. The Finance Ministry says that the scrapping of import duties was necessitated due to below expected yields in the country and surge in domestic cotton prices.

On this, AIKS President Ashok Dhawale said: “On the pretext that the move is to ease the pressure on domestic textile industries’ export competitiveness vis-a-vis fellow competitors, it goes on to the unfounded claim that it would also provide relief to the consumers.”

“It is a well-known fact that the big corporate textile industries never transfer benefits of cheaper raw materials to consumers as they are driven only by the motive of profit maximisation.”

AIKS General Secretary Hannan Mollah pointed out that this decision of the BJP government will spell disaster for the cotton farmers of our country “who already are in acute crisis and unable to realise remunerative prices”.

“There is no protection guaranteed to the cotton farmer in the form of assured procurement at remunerative prices at least one and a half times the cost of production as of now. Inflow of raw cotton will lead to a further crash in prices and in absence of effective price stabilisation, the burden of such crashes will fall on the poor farmers of India. This is the experience when import duty of raw silk was done away with,” he said.

The AIKS has demanded that the BJP government must withdraw the decision, reinstate import duties on cotton and make arrangements to procure farmers’ produce at remunerative prices.

“The government, instead of foregoing revenue by scrapping import duties, should incentivise farmers,” it demanded and called upon its units in the cotton growing states to rise in protest against the “insensitive decision”.

How exercise keeps dementia at bay