Cyclone Amphan leaves a trail of destruction in Odisha 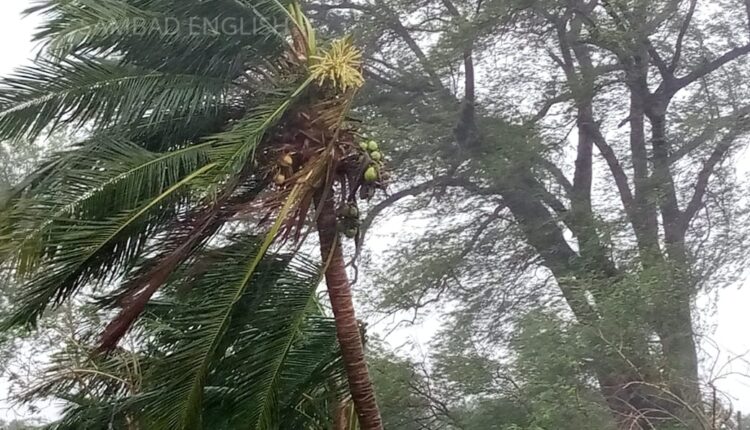 Bhubaneswar: The nervous moments were over after the extremely severe cyclonic storm Amphan passed along the Odisha coast and move towards West Bengal where it made a landfall.

Though wind speed and rain battered the coastal districts of Odisha, it left a trail of destruction before moving towards the West Bengal.

Electric poles were uprooted, telephone and cable television wires were snapped, trees were uprooted and thatched houses were razed to ground. Besides, at least three deaths were reported during the day.

A three-month-old girl from Bhadrak died after coming under a mud wall after collapse, a 67-year-old woman died in Kendrapara due to possible cardiac arrest as she suffered severe chest pain. She could not be taken to hospital as uprooted trees blocked the road while taking her to hospital. Similarly, a 60-year-old man from Sambalpur died after a tree branch fell on him while he was in his farm, killing him on the spot.

A large number of trees and electric poles got uprooted and mud houses were flattened due to heavy wind speed and rainfall. The telecommunications services remained by and large unaffected, said Special Relief Commissioner Pradeep Kumar Jena.

The Chief Minister Naveen Patnaik had directed the officials to ensure zero casualty ahead of the impending cyclone. The officials of NDRF, ODRAF, Fire department, police, and district administrations swung into action and evacuated over 1.6 lakh people from low-lying areas as well as people living in quarantine centres that are in 3-km radius from the coast.

The evacuees were shifted to 2921 shelter homes where they were provided free cooked food.

As per official data, Jagatsinghpur received highest rainfall of 119.4 mm followed by Puri with 71.2 mm, rainfall. Similarly, the wind speed was recorded highest at port town Paradeep with 106 kmph.

The MeT forecast had left people in the state panicked as it is considered the second major cyclonic storm in the Bay of Bengal after the super cyclone of 1999 which had claimed roughly around 10,000 lives. Apart from the colossal loss to lives, it had caused massive damage to infrastructure.

Another reason of worry for the nervous lot was cyclonic storm FANI that hit the state last year. It had claimed at least 64 lives. The natural calamity-hit state won many accolades at national and international levels for effective disaster management.