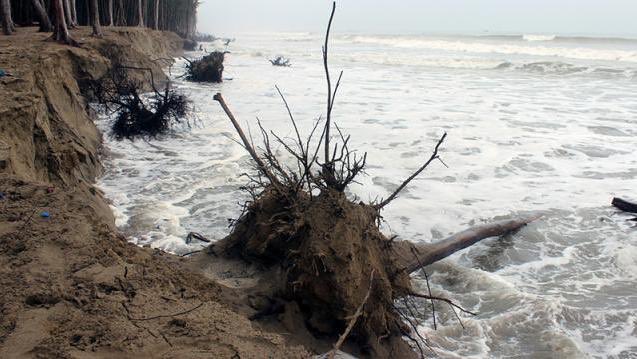 At least five persons were killed in Bangladesh after Cyclone Mora hit the country’s south-eastern coast on Tuesday with nearly 300,000 people from 10 coastal districts already evacuated.

Two persons died after they were hit by falling trees in Cox’s Bazar district, bdnews24 reported.

One child died in Bhola district while in Rangamati town, trees uprooted by the cyclone fell on a woman and a child killing both, police said.

The powerful storm, which prompted authorities to sound the highest level of alert, made landfall around 6 a.m. in Kutubdia, near the fishing port of Cox’s Bazar, the Bangladesh Meteorological Department said.

The Met office said that the cyclone had already started to lose strength, but strong winds and heavy rain in Cox’s Bazar and Chittagong were likely continue throughout the day.

Road Transport Minister Obaidul Quader told the media in Dhaka that around 20,000 houses were damaged. The authorities moved hundreds of thousands of people to shelters.

Briefing the media at his office, the minister said a child was reported missing during the storm.

Fishing boats and trawlers were advised to remain in shelters. All flights in and out of Chittagong’s Shah Amanat International Airport were also cancelled.

The Ministry of Disaster Management and Relief set up 24-hour control rooms.

About 18 million people live in 19 coastal districts, with 10 of them being in high-risk areas. The country’s two main seaports in Chittagong and Mongla stopped operations, and river transport across Bangladesh was also suspended. (IANS)