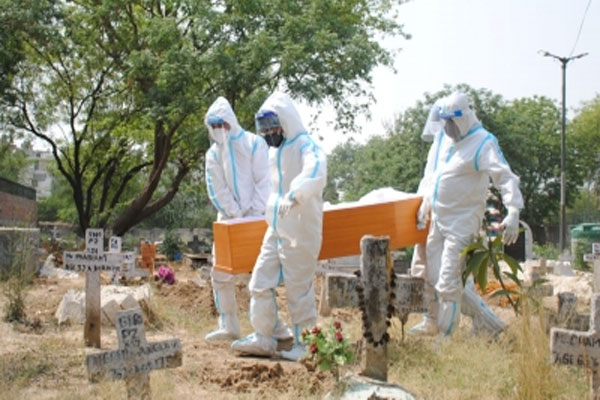 New Delhi: Delhi’s largest Muslim cemetery went out of space during the second wave surge. All cemeteries more or less were running out of space as the death toll was mounting every day. The pandemic saw rush at the cemeteries, but, the fact is that with a growing Muslim population in the national capital, the land for graveyards has not increased. The shrinking graveyard spaces are forcing Muslims to go for multiple or ash burials.

As per the reports, there are 704 Muslim graveyards in the various parts of the national capital territory. Of these only 131 graveyards are functional at present. Out of these 131 graveyards, 16 are not in use because of litigation over ownership of the graveyard land, bad landscape leading to waterlogging or other problems. Among the 11 districts of the city, South Delhi has the highest number of graveyards (33), followed by North West Delhi (19), North Delhi (17), South West Delhi (11), North East Delhi (10), West Delhi and East Delhi (9 each), South East Delhi (eight), Central Delhi (six), Shahdara (five), and New Delhi (four) in descending order.

The growth of the Muslim population has not been complemented with the numbers and space of the graveyards in the city.

Former chairman of the Delhi Waqf Board Mateen Ahmed told IANS that the capital city faces acute shortage of land for Muslim graveyards.

On being asked about the graveyards’ condition pre-Covid era, he said that the pathetic situation prevailed even then, adding that, most of the Delhi Waqf Board’s graveyards are mainly situated where Muslims have negligible population as they migrated from there after Independence and now Hindus have settled down there. Resultantly, the Muslim dominated areas have no graveyards in the city. They have to travel miles away to perform the last rituals. He added that the Delhi Waqf Board has nothing to do much, but only DDA can take decision in this regard to provide land for the Muslims cemeteries.

He said that after all Covid dead bodies of the city were buried in Delhi Gate Cemetry, we still have around 20 acres of land here for last rites which is enough for the next 10 to 15 years.

Contrary to popular perception, he said that all occupied lands are being reused as our religion permits to level up the graveyards after three years. In many cases, we use the same graves for multiple bodies of the same family after certain years, said Hasan Siddqui.

The Delhi Minorities Commission report on Christian cemeteries says that the commission found only 13 operational cemeteries out of which one — Lothian Cemetery at Kashmiri Gate — closed and was declared as a protected monument. Of the total cemeteries, only five are open to all Christians in the city, whereas five of them are open only for family graves or doubling. Also, two of these cemeteries — one in Okhla and the other one in Mehrauli — are open only for pastor families and members of the Church of North India respectively, the study says.

The Delhi Cemetery Committee Secretary Eugine Ratnam told IANS that the committee has written many times to the Urban Development ministry to allot the land for graveyards. The committee has five cemeteries under its ownership in Delhi and all are closed due to the paucity of the land from several years. In the absence of land, he said, people have to go all the way to Burari, Dwarka and NOIDA for last rites.

Eugine said that we have now started ash and multiple burials for the bodies because of the land crisis. In the ash burial, the body is being cremated and a handful of ashes is buried in the grave. Many times, the same grave is used for the family members in many cemeteries as multiple burials, he added.

The Christians travel long distances in the city to perform the last rites of their loved ones.