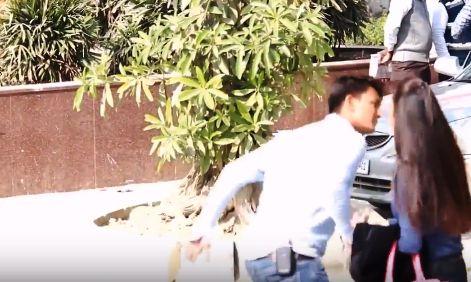 Delhi Police has arrested a 21-year-old molester, known as ‘Crazy Sumit’, who would kiss young women on the streets and flee, and post videos of the ‘prank’ on social media.

Police said on Friday that the accused youth, identified as Sumit, is a final year BCA, student of WCTC college in Gurugram. His friend, Satyajeet Kadyan, 23, who helped him as a “camera man” to record the ‘prank’, has also been arrested.

“We tracked Sumit and Kadyan after examining the CCTV footage of a restaurant where they were partying a couple of days ago in Gurugram. On the basis of their identities, we finally traced Sumit’s address,” a senior police officer told IANS.

“On questioning, Sumit told interrogators that he and Kadyan played the ‘prank’ for gaining publicity, and also claimed that the two girls who he kissed in the ‘prank’ videos uploaded in social media are known to him, and are his friends,” the police officer said.

“Sumit has denied molesting any women. He said he kissed the young women with their consent. We are investigating the case and are waiting for the victims to come forward to give statement against him,” the officer said.

Some more people may be involved in the case, such as service providers, and they will be arrested soon, police said.

Delhi Police on January 7 had assured of action against Sumit after his “kiss and run” videos on YouTube went viral.

Sumit maintained a YouTube channel by the name ‘Crazy Sumit’ where he uploaded videos of him approaching young women on the streets on some pretext and then running away after kissing them.

He also uploaded an ‘apology’ video on the same channel, saying the act was staged and he had no clue that the matter would escalate to this level. (IANS)

Changed my batting order for team, will do so again: Dhoni