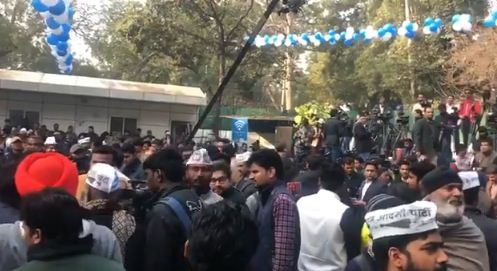 New Delhi: As the counting began for the 70 Assembly seats in Delhi, the Aam Aadmi Party office here is all set to celebrate the re-election.

The Exit polls have predicted a clean sweep for the Aam Aadmi Party. The initial trends are also supporting the claim.

Since early morning on Tuesday, the party volunteers started coming to its headquarters at Rouse Avenue here.

Party national convener Arvind Kejriwal also visited the headquarters at 8.47 a.m. along with his father and wife and is expected to stay here until the final results are announced.

Kejriwal will address the volunteers from the terrace of the party headquarters after the results will be clear.

There is also a new banner outside the party office, with the same old slogan “Ache honge paanch saal, Delhi me to Kejriwal” (The coming five years will be good, Kejriwal will be in Delhi).

The party office has been decorated with blue and white balloons — party’s theme colour.

The picture was not much different at the Chief Minister’s residence at Civil Lines.

Party candidates and supporters started pouring in to the CM House since early morning on Tuesday.

The counting started at 8 a.m. on Tuesday.

RedmiBook may launch in India on February 11