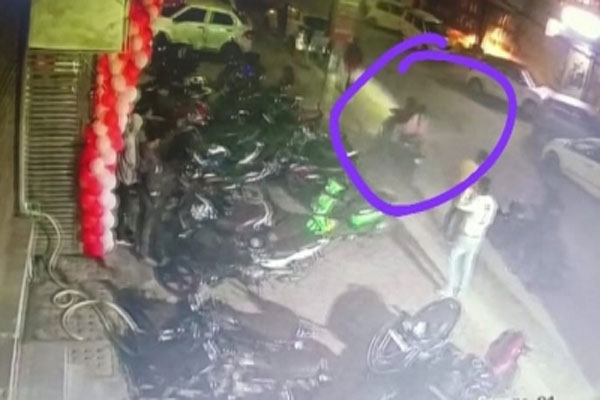 New Delhi: A new CCTV footage has surfaced showing the victim, who died after being dragged by a car here, leaving a hotel with her friend on her scooty.

The 20-year-old girl, identified as Anjali, died in the early hours of January 1 after her scooty was hit by a car and was dragged for around 10 to 12 kms under the Baleno car on the city’s roads.

In the CCTV footage, the victim was seen leaving Vivan Palace OYO hotel at around 1.30 a.m. along with her friend after attending a New Year’s party.

As per footage, the victim was wearing a pink-coloured T-shirt and her friend a red one.

The footage comes after the police traced the route which the victim had travelled.

“The room was booked by the girls and they came here late evening. Around 12 a.m, a few of their male friends came and stayed there for 10 minutes. Both the girls had an argument, they were asked to vacate the room by the hotel manager and later they went on scooty,” said Rohit, a staff of the hotel.

Police have also recorded the statement of the other girl, said the sources.

Meanwhile, the Special Commissioner of Police, Shalini Singh visited the spot on the intervening night of Monday and Tuesday.

Singh, accompanied by Deputy Commissioner of Police (DCP) EOW Jitender Kumar Meena and her staff, reached the crime scene at 12 a.m. and took a round of the 12-km long road on which the woman was allegedly dragged by the car.

On Monday, the Ministry of Home Affairs (MHA) constituted an inquiry committee led by Singh to furnish a report in the case by Tuesday evening. Earlier, a team of three doctors conducted the post-mortem of the deceased. The autopsy report will be furnished by Wednesday evening.

Two teams of forensic science lab (FSL) also visited the spot and collected exhibits from the crime scene. The FSL team also collected samples from the victim’s scooty and the accused’s Baleno car.