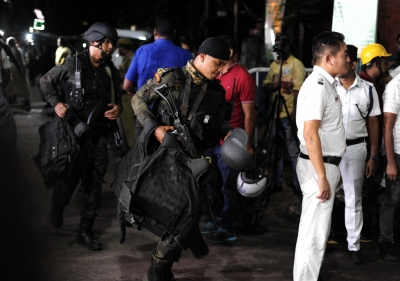 Kolkata/Bhubaneswar: In an incident that has sent shockwaves across Kolkata, a CISF Head Constable from Odisha allegedly gunned down his colleague from the state at the Indian Museum in Kolkata, today.

Accused Akshay Kumar Mishra, who hails from Dhenkanal district, was recently denied leave to attend his father’s funeral, following which he was mentally unstable, reports said.

After being nabbed by police, he said, “Galti Ho Gayi” (I made a mistake).

Mishra, who opened indiscriminate fire with his AK-47 rifle this evening, killing Assistant Sub Inspector Ranjit Sarangi and injuring Assistant Commandant rank officer Subir Ghosh, was neutralised and apprehended after over an hour-long operation by a joint team of Kolkata Police commandos and the paramilitary force, police said.

The entire operation was led by the city Police Commissioner, Vineet Goyel himself who rushed to the crime spot at the Indian Museum, at the busy Park Street, immediately sporting a bullet-proof jacket and metal headgear.

On getting the news, commandos of Kolkata Police and other CISF officers and troopers cordoned the Museum area, and used microphones to ask the trooper to surrender.

A city police source said that the joint team first identified the area in the museum area where jawan was hiding. After that, electrical connections to the entire block was snapped. Then a Kolkata Police commando fired tear gas shells, which forced the killer jawan to come out in the open, following which he was quickly neutralised by the combat force commandos and apprehended.

Speaking to media persons, the Commissioner of Police said that the killer jawan was caught without any increase in the number of casualties. “At least 15 rounds were fired. We are investigating the reason why he resorted to indiscriminate firing. Prima facie it seems that he was suffering from mental depression,” he said.

A senior city police official said that fortunately the firing happened after the Indian Museum gates were closed for the visitors and many staff of the museum had left. “Otherwise, the number of casualties would have been much more,” he said.

This is the second case of a shooting by a security personnel on a Kolkata street in the last three months.

On June 10, a Kolkata Police constable, deputed for security of Bangladesh Deputy High Commission at busy Park Circus, opened fire with his Insas rifle, killing one woman, before committing suicide.