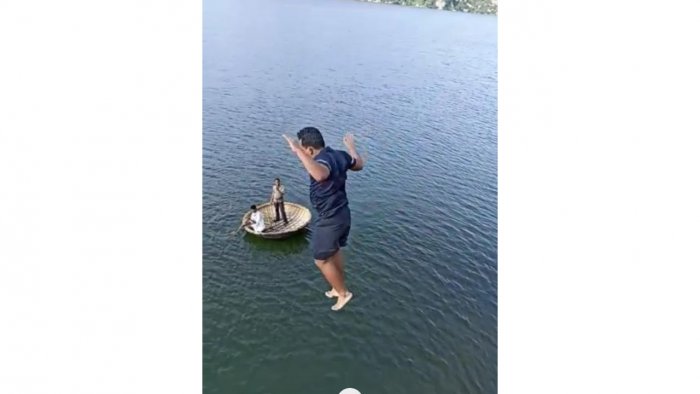 Koppal, (Karnataka): A video of the Deputy Commissioner (DC) of Karnataka’s Koppal district taking a dive from the top of a hill into the Sanapura reservoir to promote tourism has gone viral on social media.

The Sanapura reservoir is called a death trap as people fear visiting this place. Anegundi or historically known as the monkey kingdom of Kishkinda, is also situated in this district. Anegundi is also a part of world heritage site Hampi.

The nearby village Nivapuram has a mount of ash believed to be the created from the remains of monkey king Vaali (a character in Hindu sacred book Ramayana).

However, despite having great tourism potential, Koppal district is considered as one of the most backward districts of the state. Therefore, DC Vikas Kishore Suralkar, started a proactive measure by volunteering to take a deep dive into the reservoir, considered a death trap, to encourage tourism.

Panchayat CEO Fauzia Tarannum, Executive Officer of Taluk Panchayat Mohan and others also participated in the adventure. In the video, the staff was seen applauding and encouraging Suralkar as he took the dive.

DC Suralkar is known for his adventurous activities. Earlier, he had taken up cycling, horse riding and rock climbing in Kammatadurga, Benakal and Anegundi parts of the district.

The initiative was well appreciated by people as they complimented him for his proactive nature.

Tobey Maguire, Andrew Garfield to return in ‘Spider-Man: No Way Home’? Here’s what we know so far