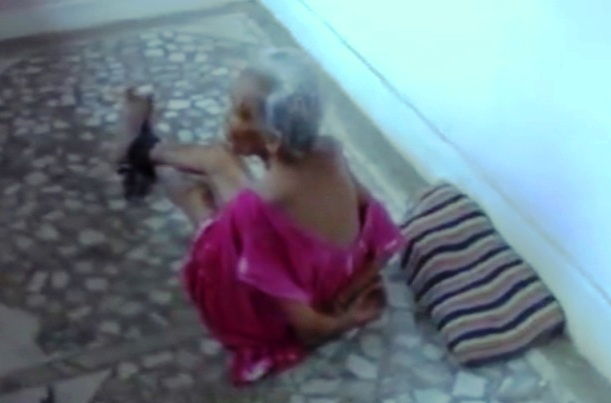 The district administration authorities today rescued an elderly woman from a house in Odisha’s Dhenkanal town whose limbs were tied by her family members.

The 75-year-old woman was spotted crawling on the verandah with hands and legs fastened with a cloth.

This inhuman incident has come to the fore today after neighbours tipped the district administration about the incident.

The District Collector instructed the Additional Tehsildar to enquire into the matter and take necessary steps.

“As per the directions of the District Collector, I along with the IIC of Town police station raided the house at Kumar Sahi. A family hailing from Chhatia area is residing at the house where the 75-year-old woman identified as Suna Dibya was found in the verandah with her limbs tied. The woman was rescued and sent to District Headquarters Hospital where she underwent several investigations. She will be hospitalized as per the advice of the doctors or else we would shift her to an old age home,” Additional Tehsildar Saroj Kumar Panda said.

The frail woman was living with her grandson and granddaughter-in-law in a rented house here.

As per the family members, she has psychiatric problems and they are forced to keep her tied for that reason.

“She has mental disorders and defecates here and there for which we have tied her. We untie her while serving her food,” granddaughter-in-law of the woman claimed.

Later in the evening, the woman was sent to Maharishi Dayananda Mission, an old age home here.