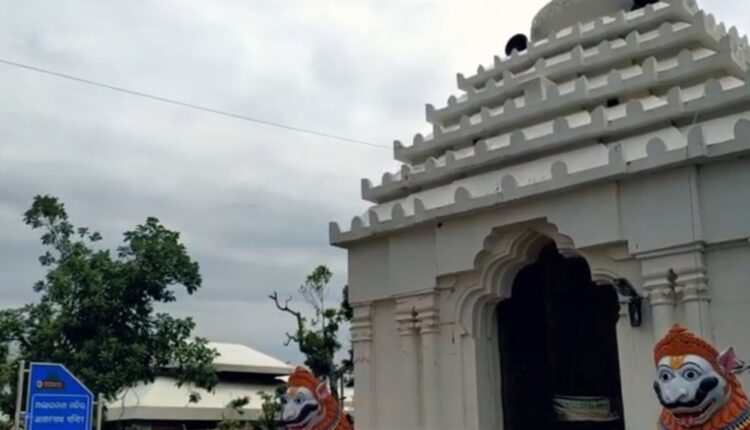 Puri: Hundreds of devotees today thronged the Alarnath Temple near Brahmagiri in Odisha’s Puri district as the Deities of the Shree Jagannath Temple are away from public view after the grand bathing ritual on the occasion of Debasnana Purnima yesterday.

The Deities go on a fortnight-long hibernation known as ‘Anasara’ or ‘Anavasara’ after they fall sick following the bath with 108 pitchers of holy water. During this period, devotees seek blessings of the deities at Alarnath Temple, a 13th century shrine.

The temple administration has made elaborate arrangements for smooth darshan. The devotees made a beeline to the temple since early morning.

The pilgrims not only gather to get a view of the presiding deity, but also get a taste of the famous khiri (rice porridge) here.

Known for its unique idol of a four-armed standing Vishnu made of black chlorite, the Alarnath temple becomes the place to visit during the anasara of the sibling trio of Jagannath temple who are said to fall sick after a lavish bath on Debasnana Purnima.

Residents of Brahmagiri believe that the Alarnath temple became the devotional destination during this period ever since saint Chaitanya visited it after he missed the view of Lord Jagannath in Puri during anasara.

Legend has it that the temple is named after the Alwar royal dynasty of Rajasthan. It is believed that the shrine was established by one of the Alwar rulers. Hence, it has been named as Alwarnath, which later became Alarnath. The khiri prepared here is in great demand throughout the year and also has an interesting legend behind it.

As per popular belief, the temple priest had once forgotten to offer Khiri to the deity even though he had prepared it. When the priest realised it and returned to offer it, he found the khiri drops on the face of the idol. It is said that the deity had tasted the offering.

It may be mentioned here that patta paintings known as ‘Anasara patti’ or ‘Anavasara patti’ of Lord Jagannath, Balabhadra and Devi Subhadra are worshipped in the 12th century shrine during the anasara period. Besides, the darshan of Patitapabana—the representative image of Lord Jagannath on the right side of the main entrance of temple from Simha Dwara—is also closed. Anasara patti of Patitapabana is also placed in front of the main entrance for public darshan.