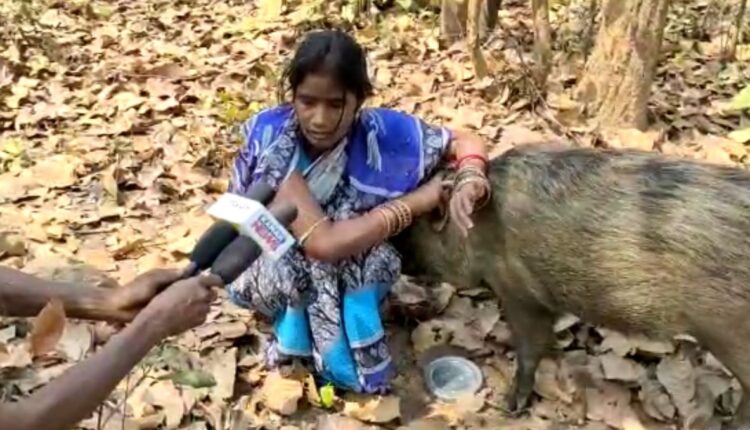 Telkoi: Happiness of Kuntala Kumari Penthei from Purushottampur village in Keonjhar district and her family knew no bounds when their pet boar ‘Dhud’, that was reportedly taken away from them by Forest personnel forcibly, returned to her lap on Tuesday.

‘Dhud’ has been an integral part of Kuntala Kumari’s family since its childhood. Kuntala Kumari brought up the boar at her house and gave food whatever she and her family ate after rescuing her from a forest near her house.

But a few days back, the Forest personnel raided her house to her dismay and reportedly took away the boar forcibly and released it into forest.

Kuntala Kumari and family were broke after the incident and worried about the well being of ‘Dhud’. For consecutive eight days, the woman and her children carrying rice in a large utensil went to the forest and called ‘Dhud’ hoping that it would come to them and eat the food. On the ninth day on Tuesday, ‘Dhud’ came to Kuntala Kumari in the forest and ate rice.

“‘Dhud’ has been limping as it has sustained injuries in the left hind limb. Also, it has become weak without food in the forest,” said Kuntala Kumari.

She further said ‘Dhud’ was not safe in the forest as fire was raging there. Moreover, from its childhood the boar has been eating food that humans are eating.

“We want ‘Dhud’ to stay with us and the Forest personnel should not intervene into it,” she added.

Rajashree, daughter of the woman, said her mother rescued the boar at infant stage from stray dogs in nearby forest when she had gone to collect firewood. Her mother brought the baby boar home and nurtured it.

The woman’s daughter further said when the baby boar was staying with them at their house no Forest official objected to it.

Meanwhile, Telkoi Forest Ranger Pramod Kumar Sethi said the boar rescued from the house of a woman in the village was released to Samakoi reserve forest and it was safe.