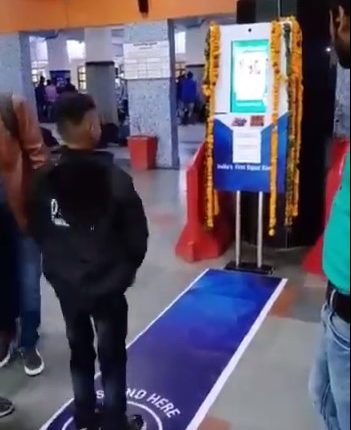 New Delhi: A 25 second video that went viral on Friday within minutes of being shared by Railway Minister Piyush Goyal giving a huge thumbsup to the Fit India movement, received big applause from netizens.

The video showed a man doing squats to avail a free entry in the railway station. Shared the video, Goyal said: “Saving with fitness too: A unique experiment has been conducted to encourage fitness at Delhi’s Anand Vihar railway station. Platform tickets can be taken free of charge after exercising in front of the machine installed here.”

As the man completes his pushups, the machine sensors count the number of squats and dispense the ticket.

Responding to Goyal his Sports counter Kiren Rijiju wrote: “What a unique step by Railway Minister Piyush Goyalji. Fitness for free and saving money too! Exercise in front of this machine at Anand Vihar railway station in Delhi and get a free platform ticket. Let’s make Narendra Modi’s initiated FitIndiaMovement a people’s movement.”

The video has collected nearly 167,000 views and hundreds of comments within hours.

A user wrote: “Wow this is really great. Great Innovation to motivate for fitness… Great respect for @PiyushGoyal one of the best Minister.”

Another said: “Very good effort…Please install such machine all over the country….”

A post read: “Kejriwal will now claim this achievement by putting out posters.”

“Wonderful initiative. Till we saw such experimental machines only in western countries but now india also has joined them for this good work which will create awareness for fitness. Folded hands. Thank-you sir,” a user remarked.