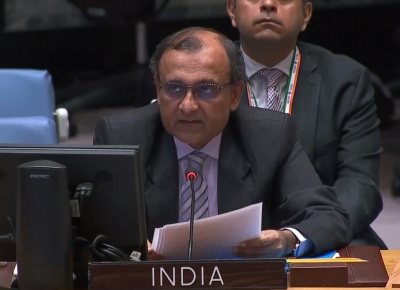 New Delhi: India’s Permanent Representative to the UN, T.S. Tirumurti engaged in a Twitter spat with the Dutch Ambassador to the UK and Northern Ireland, Karel van Oosterom over New Delhi’s abstention from voting at the General Assembly against Russia’s war in Ukraine.

In a tweet late Thursday, Oosterom said: “You should not have abstained in the GA. Respect the UN Charter.”

To this, Tirumurti replied: “Kindly don’t patronize us Ambassador. We know what to do.”

The Twitter spat came hours after Tirumurti addressed the Security Council where he reiterated New Delhi’s neutral stance and said: “India remains on the side of peace and therefore believes that there will be no winning side in this conflict and while those impacted by this conflict will continue to suffer, diplomacy will be a lasting casualty.”

Tirumurti said India “has strongly condemned the killing of civilians in Bucha and supported the call for an independent investigation”.

He also said that India welcomed UN Secretary-General Antonio Guterres’ visits to Moscow and Kiev late last month for meetings with the leaders of the two warring countries.

The envoy praised the UN evacuation of civilians from the besieged Ukrainian city of Mariupol and said: “We hope these efforts will extend to other areas as well.”

The latest abstentation from India came on April 7 when the General Assembly voted to suspend Russia from the Human Rights Council.

This was India’s eighth abstention on actions at the UN related to the Russia-Ukraine war.