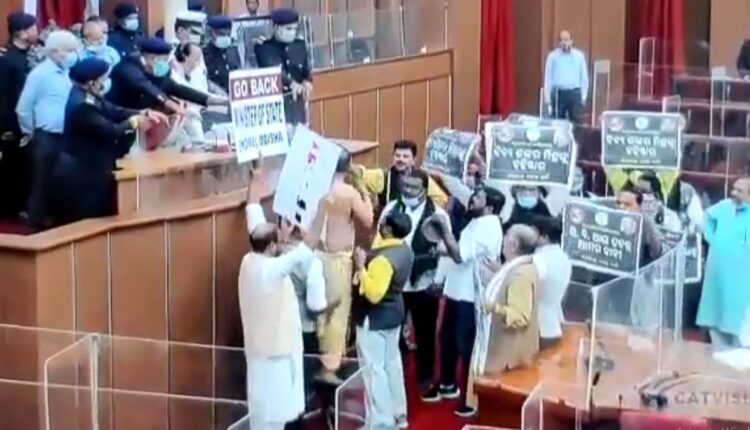 Bhubaneswar: Tara Prasad Bahinipati, a senior Congress legislator in Odisha Assembly on Saturday dressed up as a Hindu priest and sprinkled ‘Ganga Jal’ and cow urine’ inside the Assembly hall in a bid to ‘purify’ it.

The Congress MLA has alleged that MoS Dibya Shankar Mishra has been accused of having links with Gobinda Sahu – the prime accused in the murder of Mamita Meher, has put his ‘unholy feet’ in the House and the temple of democracy has became ‘desecrated’.

So in a bid to purify the House, Bahinipati, donning the attire of a priest, performed puja in the Assembly amidst ringing of bells by his party colleague. He also chanted mantras.

Speaking to the media outside the House, Bahinipati said: “Minister Mishra put his unholy steps in the temple of democracy and desecrated it. I sprinkled Ganga Jal, cow urine and basil leaves on the floor to purify it.”

The Congress MLAs did it soon after the Assembly assembled for the day at 10.30 a.m.

In his response, Speaker SN Patro said: “It is not a drama hall… please go to your seat.” Other party colleagues also joined Bahinipati.

The BJP members, who performed a similar act in the Assembly premises outside the Hall, on Saturday also continued to create uproar in the House along with the Congress.

Carrying placards, the opposition members rushed and shouted slogans against the government over the case and created a ruckus.

Unable to conduct the question Hour session, the Speaker repeatedly requested the members to go to their seats.

As the opposition members did not respond to him, the House first adjourned the House till 4 p.m.

When the BJP and Congress members continued their protest in the post-lunch session, the House was adjourned till Monday. With this, a stalemate continued in the Assembly for the fourth consecutive day of the winter session.

The opposition BJP and the Congress members were continued their protest demanding dismissal and arrest of Minister Mishra for his alleged involvement in the murder case.

Chief Minister Naveen Patnaik had made a statement in the House through video conference yesterday saying his government is committed to give justice to Mamita Meher.

However, it seems that the Opposition is not in a mood to go back until their demands are not fulfilled.