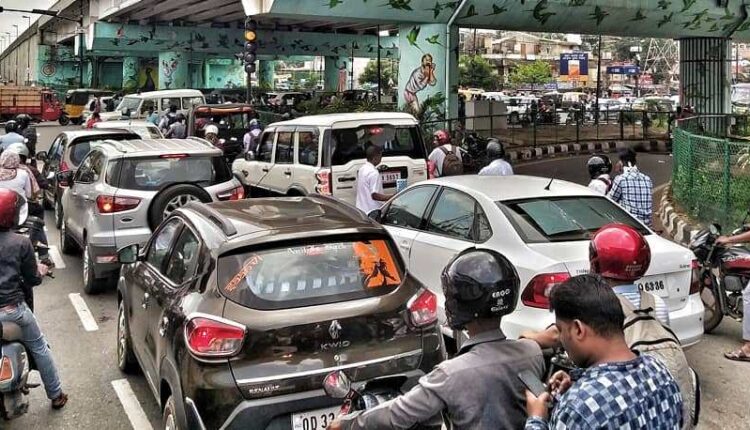 Bhubaneswar: The Twin City Commissionerate Police will impose traffic restrictions in Odisha capital from October 1 to 5 in view of Durga Puja festival.

The restrictions will be imposed from 4 PM to 2 AM on the above-mentioned dates.

Heavy vehicles will not be allowed to ply on the following roads:

* Khandagiri crossing to Pokhariput crossing and vice-versa via Jagamara and Gandamunda crossings.

* Both side service roads of NH-16 from Baramunda to Palasuni.

* No vehicles to be allowed to move through Nayapalli VUP, which are coming on the service road from Jaydev Vihar to CRP Square.

* Taking into consideration the volume of traffic and number of devotees, the heavy vehicles coming from Khurda side shall be diverted from Pitapalli to Balikuda via Chandaka and Baranga via Trushilia.

* During Ravan Podi, the entire vehicular traffic coming on NH-16 from Cuttack side shall be diverted from Jayadev Vihar to CRP square via Beherashai, Shastri Nagar, Power House and Unit-8 DAV crossings.

However, taking into account the public convenience and safety, the passenger buses coming from Puri to Bhubaneswar shall be allowed to ply from Lingipur to Baramunda Bus stand via Samantarapur, Kalapana, Rajmahal, Sishu Bhawan, Soor Company, Ganga Nagar and Fire Training school.

Similarly, the buses coming from Baramunda to Puri shall be allowed to ply in the same route.

Further, the buses coming from Puri side towards Cuttack will avail the bypass on NH from Lingipur to Hi-Tech Chhak via Sai temple, Kesura and Pandra Chhak instead of Kalpana, Laxmisagar, Rasulgarh.

Similarly, buses from Cuttack side towards Puri will avail the same route from Hi-Tech Chhak to Lingipur.