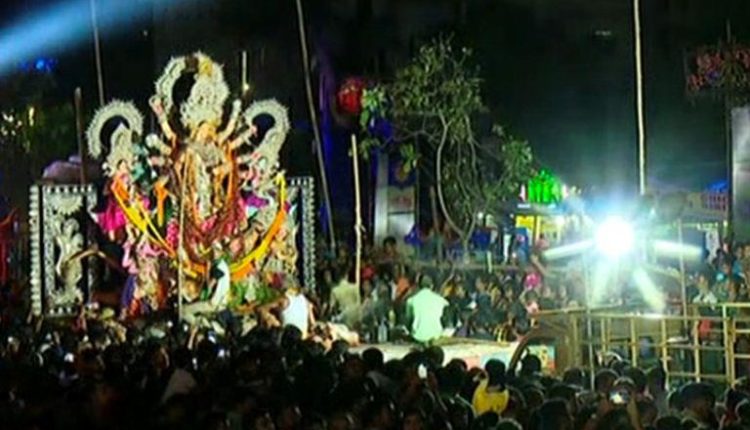 Bhubaneswar: The Durga Puja festivities came to an end today in the State, with revellers queuing up near water bodies for idol immersion as they bid adieu to the goddess.

Women offered sweets and prayers to the goddess whereas young danced merrily to the tune of music. Since afternoon, colourful processions dotted the streets.

In Bhubaneswar, the Durga idols of different puja committees were brought to Nayapalli, Saheed Nagar and RTO field in Chandrasekharpur, following which immersion procession began.

The administration has set up temporary ponds near the banks of Kuakhai and Daya rivers for immersion of idols in Bhubaneswar. Similarly, temporary ponds have been established at Debiagada in Cuttack.

The Twin City Commissionerate Police imposed restrictions on traffic movement in the Cuttack since 11 am today keeping in view congregation of large number of people during the immersion ceremony. Source said 57 platoons police force have been deployed in Cuttack, the city famous for Durga Puja celebrations.