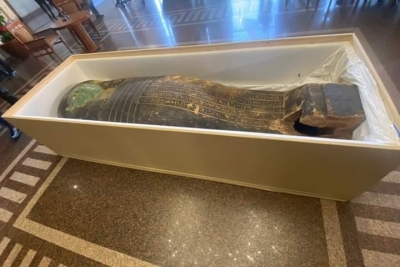 Cairo: Egyptian authorities have announced that a significant ancient cover of a coffin known as the “Green Coffin” was returned from the US.

The artefact belongs to a priest named Ankh In Maat, which dates from the Late Period (664-332 BC), the Tourism and Antiquities Ministry said in a statement.

The green coffin cover, made of wood, is nearly 3 metres long and carved with gilded decorations and hieroglyphic writings, Xinhua news agency quoted the Ministry as saying.

It will be deposited in the Egyptian Museum in Cairo to be examined and maintained, it added.

Sixteen other artefacts were also recovered from the US along with the coffin, according to the Ministry.

Minister of Foreign Affairs Sameh Shoukry and the Minister of Tourism and Antiquities Ahmed Issa witnessed the ceremony of handing over the artifacts at the headquarters of the Foreign Ministry in Cairo.

Issa said Egypt attaches great importance to recovering smuggled antiquities and signed many cooperation agreements with other countries, including an agreement signed between the Egyptian Foreign Ministry and its US counterpart in 2016.

Under the agreement, many important artefacts were recovered, including the golden coffin of Nejim Ankh in 2019, and more than 5,000 pieces of artefacts in 2021, he added.