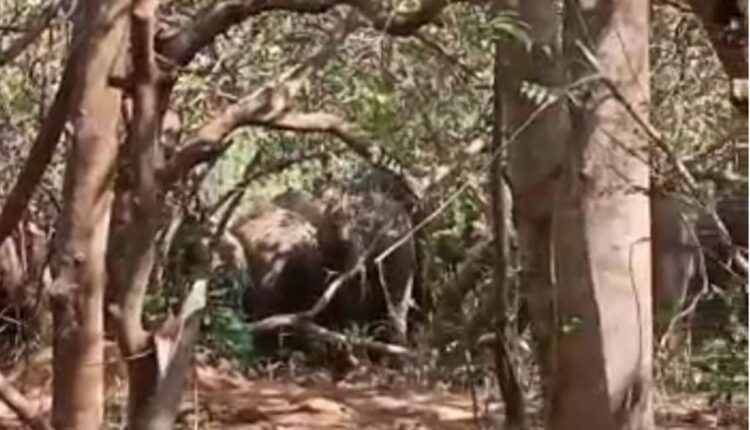 Bhanjanagar: In a case human-animal conflict, two persons including a minor boy was killed in an elephant attack in Odisha’s Ganjam district today. As per reports, a herd of 22 elephants has been roaming in Galeri forest area under North Ghumusara forest division of the district for past few days.

Yesterday a female elephant from the herd gave birth to a baby elephant in a cashew orchard, some 200 meters away from Nuanpalli village under the North Ghumusara forest division. As the news on the female elephant’s delivery broke out, hundreds of villagers gathered in the orchard out of curiosity. After receiving information, Forest personnel also reached there.

Even though the Forest personnel cautioned villagers against not visiting the cashew orchard and getting close to the elephant herd, some villagers did not pay any heed and tried to take pictures with the elephants.

An eyewitness said suddenly a tusker came out of the herd and charged towards the villagers who ran to save their lives. But one Shukuria Naik (60) from Nuanpalli village who climbed atop a tree to get a glimpse of baby elephant could not run away from the cashew orchard. The tusker trampled the elderly man killing him on the spot.

The angry tusker also ran towards the minor boy, Gaensh Gauda and threw him away with its trunk.
Some villagers rescued injured Ganesh from the spot and rushed him to the Bhanjanagar hospital. The injured minor boy succumbed while being shifted to the MKCG hospital in Berhampur.

A Forest official said the elderly man’s body could not recovered as the elephant herd stayed put in the orchard till the filing of this report.