Even after 20 years, families still live in fear near Jharia’s underground fire 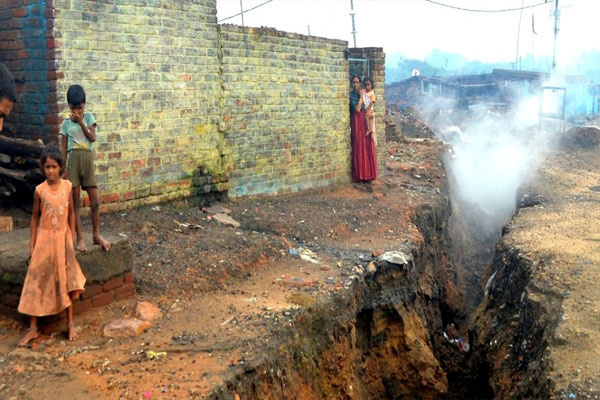 Dhanbad: Nearly one lakh families in the 280-square-kilometre Jharia coalfield region of Jharkhand continue to live dangerously. An underground fire in India’s largest coal reserve, raging since 1916, has caused the earth to sink and render buildings unsafe. Even the air is hazardous as cracks in the sunken earth emit heat, fire and poisonous gases.

Rehabilitation, the lone solution to the miseries of these families, has been faulty; large families which lived in five-room houses have been provided two-room flats. The situation has been exacerbated by large-scale encroachments and a miscalculation in the number of households in the mining zone. All this has led to sons and their families living in the old, dangerous homes, while the parents live in the new rehabilitation quarters in nearby Belgaria.

Vikram Pandey (30), his wife and three children are among the people whose families have been divided by the rehabilitation. A resident of Liloripathra, one of the underground fire-affected sites at Jharia, Pandey fears a cave-in at his house, like what happened at his neighbour Surendra Pandey’s home on June 13.

Vikram’s 70-year-old father, Alakhdeo Pandey, lives in a two-room quarter at Belgaria with his wife and two bachelor sons, Sanjay Pandey and Chhotelal Pandey. “My father, initially, waited for a separate quarter to be allotted to my family, but he shifted when nothing happened,” said Vikram, who could not move with his father’s family as the quarter has only two rooms.

The coalfield region comprises 1.04 lakh families, according to the last survey by Coal India Limited subsidiary, CMPDIL. However, when the rehabilitation had initially been planned in 1999, only 54,159 households were counted. This is because the initial figure was reached on the basis of the number of employees with Bharat Coking Coal Limited (BCCL) that year, and the new figure was reached after the Supreme Court ordered a fresh survey, which was carried out between 2006 and 2020. The Supreme Court had intervened on the basis of a petition filed by Asansol legislator Haradhan Roy.

About 78,000 of the 1.04 lakh families come under the ‘encroachers’ category. This means the homes in which they are living do not belong to them; rather they have constructed their houses illegally on BCCL land or other unoccupied government lands. The government has decided to provide rehabilitation to only those ‘encroacher’ families which could prove they had been living in the coalfield region before 2004. The compensation package and rehabilitation plan for legal titleholders have not yet been decided.

Another major reason behind the rise in the number of families is the 14-year duration of the survey. Many people like Vikram got married during this period and went to create their own families. Though the government rehabilitated the first batch of 216 families in 2009, a total of only 5,000 families have been rehabilitated to date in Belgaria, a colony developed by the Jharia Rehabilitation and Development Authority (JRDA). The rehabilitation is being carried out as part of the Jharia master plan, which is being executed by JRDA.

The remaining families continue to live around the 595 underground fire-affected sites of the coalfield region.

Pandey and his neighbour Dipak Kumar Chaudhary (29) said their parental homes were big and could accommodate the entire joint family. Vikram said his family home had five rooms and was spread over 120 square metres, while the two-room quarter his father had been allotted measured 35 square metres. “The stench from the cracks in the ground chokes us. It worsens during monsoon as rainwater seeps through the cracks and aggravates the emission of smoke,” said Vikram. The residents are at risk of breathing-related ailments like bronchitis, asthma and even tuberculosis in addition to several skin diseases.

Vikram said he had the documents to prove he had been living in Liloripathra before 2004. “If my father has been allotted a house based on the same documents, why can’t I be allotted one too?” he said.

Dipak said his father Vilash Chaudhary (60), who works at an iron-welding unit, had been allotted a quarter at Belgaria around a year ago after incidents of subsidence increased in their neighbourhood. He said his father did not move there as the flat’s doors and windows were missing and electric wiring had been stolen. “We complained to JRDA several times, but the problem has not been fixed. This has forced us to stay back,” he said.

Dipak said even if they moved to the new quarters, it would be too small as his family comprised him, his wife, father, mother and two younger brothers.

The DC’s statement meant that people like Vikram and Dipak would not get any relief from the government.

In Kujama Basti, which is 3 km from Liloripathra, the situation is just as bad. “We live in Belgaria, but we are always concerned about the wellbeing of my elder son and his family. They live in Kujama Basti and the transit between our homes is adding to our expenses,” said Urmila Devi (65).

Devi said her elder son, Ranjit Bhatt, had made several rounds of the JRDA office in Dhanbad with the same documents as furnished by her husband to prove he had been staying at Kujama Basti before 2004. “My husband, two married sons, their wives and four children and I, had been living together at Kujama Basti. As the fire situation aggravated around a year ago, a quarter each was allocated my husband and younger son,” she said.

Ranjit, meanwhile, still lives in the fire zone with his wife and children.

“I worry about them all day,” said Devi.