‘Fake godman’ beaten up in Odisha over sorcery suspicion 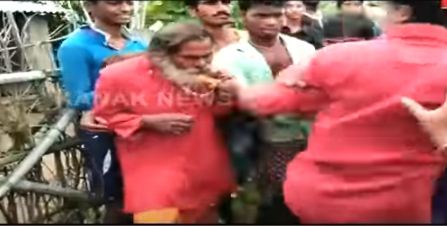 Balasore: A traditional healer claimed to be a fake godman was beaten up by the locals here this morning for allegedly practicing sorcery after a woman’s death.

The incident occurred at Bulunia village under Khunta block in Manipur panchayat in Balasore district.

The fake godman was identified as Madhusudan Nayak of Thakuramunda village.

According to reports, Sushila Khilar of the village had called Madhusudan to visit her home for treating her daughter-in-law Ambika, who was suffering from fever, in a traditional manner.

Although, the ailing woman was cured after taking herbal medicines from him, her mother-in-law Sushila died after few days.

Suspecting Madhusudan as a sorcerer, the villagers beat him up while he was trying to escape from the village. Later, police reached the spot and rescued him from irate locals.

The traditional healer said that his medicines given to Ambika worked and she was cured completely. However, he did not know the reason why her mother-in-law Sushila died.