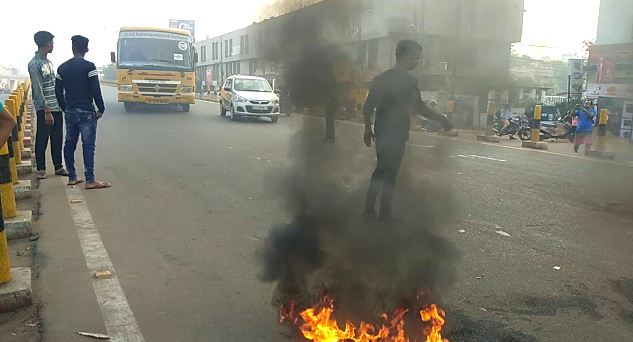 Bhubaneswar: The Naba Nirman Krushak Sangathan (NNKS) is observing a 12-hour dawn-to-dusk bandh in Odisha today demanding price, prestige and pension for the farmers of the state though the effect of the shutdown call was partial.

Members of the outfit blocked the Patia-Nandankanan road here this morning by burning tyres. Police later reached the spot and took them into preventive custody.

Similar scenes were witnessed at the Master Canteen Square here as police detained several NNKS members who were resorting to road blockade.

Youth activists of the NNKS, who tried to gherao the State Secretariat, were picked up by police.

Effect of the bandh was also felt in Bhadrak as NNKS activists staged road blockade on NH-16, thereby affecting vehicular movement. Hundreds of vehicles remained stranded on both sides of the road. Normalcy returned after they were taken into preventive custody by police.

However, there were no reports of closure of shops, business establishments and educational institutions in any part of the state. Movement of trains was also normal as there were no rail roko staged by the agitators.

Defying the State Government’s appeal to desist from the bandh, NNKS convener Akshaya Kumar had yesterday announced that the outfit will go ahead with their plan and observe the bandh.

Emergency services such as ambulance and fire fighting vehicles have been kept out of the purview of the strike.

The State Police has made elaborate security arrangements to avoid any untoward incident during the bandh. State DGP R P Sharma appealed the farmers’ outfit to observe the bandh peacefully.

Opposition parties Congress and BJP have extended their support to the Odisha bandh.

“Odisha Congress and I support the farmers of Odisha, who have come out on the roads today raising voice against the anti-farmer policies of CM Naveen Patnaik. The farmers of the state need the guarantee of the Congress and not the hoodwinking of the BJD,” tweeted Pradesh Congress Committee President Niranjan Patnaik.

Claiming that the state government has taken several steps for the benefit of the farmers, Agriculture Minister Sashi Bhusan Behera said, “It is unfortunate that the farmer’s body has called for the bandh ignoring students. That two national parties are supporting it is even more unfortunate.”