FICCI collaborates with Sambad for digital launch of ‘Odisha 50’ initiative 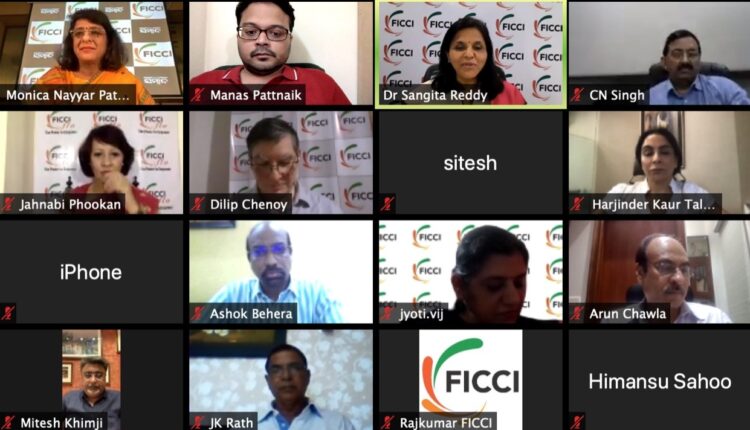 Bhubaneswar: The Federation of Indian Chambers of Commerce and Industry (FCCI) Odisha Council in collaboration with Sambad today launched the ‘Odisha 50’ initiative digitally. It is an extension of the FICCI Ladies Organisation (FLO)’s national campaign ‘Empowering The Greater 50%.’

The initiative is committed towards empowering women entrepreneurs from the grass-root level and making them self-sufficing.

As Monica Nayyar Patnaik invited all the members to the digital meeting, Dr. Sangita Reddy opened the speech talking about the pivotal role of women to the overall society.  The newly launched initiative will stress on channelizing and nurturing women’s talent in the state, she added.

“I hope that many deserving women in the grass roots, particularly those practicing some form of business, will be largely benefited through the Programme and their economic independence will get a boost through acquiring necessary training in areas like financial literacy, digital marketing etc. The special initiative of FICCI would certainly nurture the targeted women and impact their lives in a sustainable manner,” Dr Sangita Reddy said.

Jahnabi Phookan, President of FLO spoke next about how gender inequality is still a reality in India and at the same time, praised Odisha for emerging as a significant destination for investment in the current times.

Informing about state government partnership in the “Odisha 50” drive, Principal Secretary, Women and Child Development and Mission Shakti Department, Anu Garg said the broad objective of all important government initiatives towards women empowerment is to ensure sizeable partnership of women in all important areas of development happening within the state. While various steps have already been taken to increase participation of women in the workforce, certain special provisions are being made in the Start-Up Policy , MSME Policy and Apparel Policy of the government for their further inclusion in these sectors.

Commissioner-cum-Director, Mission Shakti, Government of Odisha Sujata R. Karthikeyan said, with over 7 million SHG members at present, the Mission Shakti Programme has established a wide reach within the state in both rural and urban areas. The ‘Odisha 50’ drive would facilitate one-to-one mentorship of the SHG members in all the blocks and add value to the on-going government schemes on women empowerment, self-reliance and leadership, she added.

Among the other speakers were  Jyoti Vij, Dy Secretary General, FICCI, Harjinder Kaur Talwar, former President of FLO, Mitesh Khimji of Khimji Group and Arabinda Das, News Editor Sambad.
Mr. Mitesh Khimji from Khimji Foundation informed about the support from his organization to strengthen the initiative for upgrading the status of women.

Co-Chairman of FICCI Odisha Council and CEO, Vedanta Ltd, Jharsuguda Mr. CN Singh spoke about the plan for proper highlighting of good success stories and mass awareness building among the women members in the society through the ‘Odisha 50’ initiative.

As the meeting proceeded, Monical Nayyar Patnaik highlighted the major targets of the ‘Odisha 50’ inititative. She narrated how  around 5000 women in 30 odd districts will be trained through 300 trained mentors from 314 blocks under this initiative.

She later mentioned about introducing a certificate of appreciation, the “Sharda Seema Samman” for one best mentor. Along with the certificate, the selected mentor will be awarded a cash prize of Rs.1, 50,000.

The meeting closed with the concluding speech of CN Singh, CEO of Vedanta Limited, Jharsuguda.

Odisha: Final semester exams of UG and PG courses to be held by Sept 30

Odisha govt offices to work with 50% staff in twin city