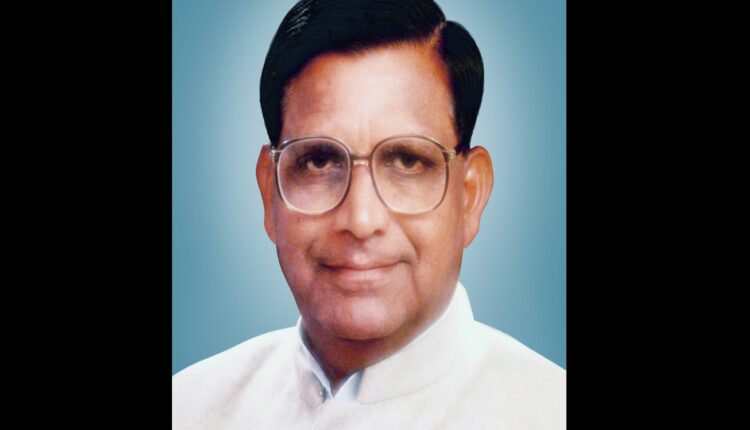 Born on 2nd September, 1940 into a freedom fighter’s family at Bargaon village, about 14 kms from Sambalpur,  Sriballav’s story was one of a self-made man, who rose through the ranks through sheer hardwork and meritorious leadership qualities.

Starting from being the youngest president of any District Congress Committee in India (he became Sambalpur, DCC president in 1967 at an age of 27) to reaching Parliament, Sriballav climbed the political ladder only through his merit.

He became India’s youngest Cabinet Minister when he joined then Chief Minister Nandini Satpathy’s Cabinet, in 1973 when he was just 32 years old and went to handle many important portfolios like Revenue, Irrigation & Power, Law, Education, Parliamentary Affairs, Food & Civil Supplies and Commerce between 1973-77.

He was elected to the Lok Sabha for 3 terms, in 1984, 1991 and 1996 where he made a mark for himself on the national platform. An excellent orator, he was used by the party to put forth it’s views on many important debates in the Lok Sabha. He was nominated to be the Chairman of the Parliamentary Standing Committee on Petroleum and Chemicals (1993-96).

Till date, the largest Central Government projects in Western Odisha – Mahanadi Coalfields Limited (MCL) and Railway Division in Sambalpur were because of his efforts, residents opine.

He was also an active Trade Unionist. He was the President of the OCMS (Orissa Collieries Mazdoor Sangh) which was among the largest trade unions in Odisha.

He was also an educationist. He was the President of the New Life Education Trust which handled more than 500 Aurobindo Schools across the state of Odisha.

A man of principles, Sriballav never compromised on his ideals of honesty and integrity. He was a towering personality and a genuine son of the soil who always worked for the betterment of his motherland and her people.

Another colleague of Sriballav Babu, Bhupinder Singh Hooda (former Chief Minister of Haryana and currently leader of Opposition in the Haryana Assembly) said that both he and Sriballav Babu belonged to freedom fighter families. He said Panigrahi was a great parliamentarian, educationist and social worker. He said his life will be an infinite source of inspiration to the coming Generations.  Panigrahi was a personal friend of Hooda as well.

Former Union Minister and Kerala Chief Minister AK Antony also paid his tributes to the departed leader. He remembered him as a valued colleague in the Parliament. He said Panigrahi was a committed social worker and an active parliamentarian. He paid his homage to the departed soul.

Narendra Mishra, IAS (Retd.) former VC of Utkal Cultural University, Former Collector of Sambalpur was Panigrahi’s Private Secretary from 1974-77 when he was a Cabinet Minister. According to Mishra, Panigrahi was a very efficient administrator. He ran his ministries very well and always kept the bureaucrats on their toes with his own knowledge and efficiency.

Various functions were organized in the region to commemorate Sriballav Panigrahi’s 5th Death anniversary across the state.

Odisha not to allow registration of Covishield 2nd dose, if…