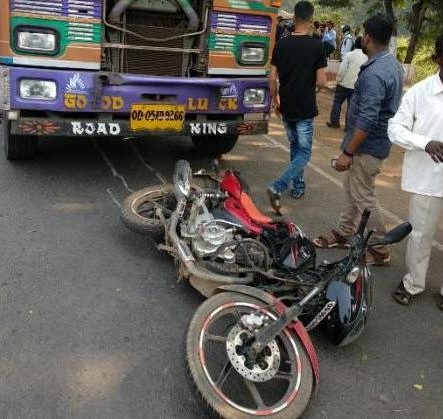 Dhenkanal: In a tragic incident, a person, his wife and their two children died after a motorcycle on which they were travelling was hit by a speeding truck near College Bypass in Odisha’s Dhenkanal district today.

The deceased have been identified as Ambuj Mallick (36), his wife Radharani, their 3-year-old son Krushna and 4-year-old daughter Sradhanjali.

The mishap took place around 1.30 pm when the four were travelling on the bike and a truck, bearing registration no. 0D 05 AD 9266, collided with the two-wheeler, killing the two minors on the spot.

On the other hand, Ambuj and Radharani were admitted to a nearby hospital where they succumbed to their injuries while undergoing treatment.

On being informed about the accident, police reached the spot and seized the truck. The driver of the truck went absconding after the mishap, reports said.

RGV booked for obscenity a day before ‘GST’ release