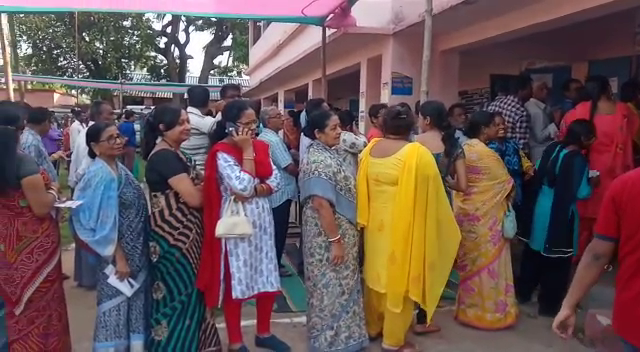 Bhubaneswar: The fourth phase polling was delayed at several places across Odisha due to glitches in Electronic Voting Machines (EVMs).

The glitches occurred at various booths as soon as the polling began at the coastal districts of the State.

The voters had to wait for hours to exercise their franchise in front of the booths in the morning.

Balasore district registered the highest number of technical glitches in EVMs so far.

The EVM glitches were reported at booth number 144 at Sahadevkhunta, booth 113 at Sunahat, booth 93 at Dhobasila in Nilagiri area, booth 35 at Chasakhand of Remuna, booth 203 at Natakata of Jaleswar, booth 119 at Raipura of Soro, booth 137 at Mahulagadia of Nilagiri, booth 126 at Seragarh and booth 140 in Balasore district.

Similarly, the EVMs failed to function at booth number 221 at Khapuriapada of Sukinda, booth 184 at Muraripur in Binjharpur, booth 84 at Vyasnagar in Korei, booth 68 at Kharajbatira in Korei and booth number 199 at Bahadalapur in Korei of Jajpur district; booth 87 at Mahakalpara, booth 179 at Bagada, booth 112 at Atharbati in Rajnagar, booth 129 at Janrabarimula in Patkura, booth 226 in Aul and booth 57 at Padanipal of Kendrapara district; booth 203 at Bangiriposi and booth 16 at Baripada of Mayurbhanj district; booth 101 at Salipur in Cuttack district; booths 102 and 103 at Jagatsinghpur Municipality and booths 29 and 40 of Jagatsinghpur; booth 71 at Mangulikhunti of Bhandaripokhari in Bhadrak district.

The EVM glitches are likely to take place in other booths in the upcoming hours today.