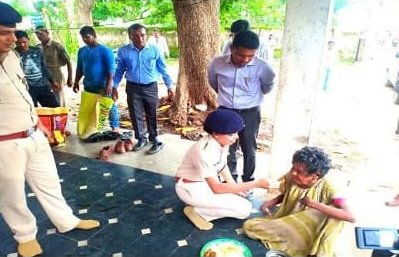 Paralakhemundi: After launching the Safety-Health-Environment (SHE) project, the Gajapati police has once again come up with a pro-people initiative and earned accolades from various quarters.

A donation drive namely ‘Akshay Dana Patra’ has been launched by the district police with an aim of collecting basic items and providing those to the poor and needy at the District Headquarters Hospital (DHH).

As a part of the initiative, two buckets have been kept on the DHH premises. People are being encouraged to donate foods and clothes by dropping those inside the buckets.

The drive was yesterday launched by Collector Anupam Saha, who praised the effort of the district police. On the occasion, the official and SP Sarah Sharma served free food to the inmates of a leprosy rehabilitation centre here.

Earlier, Gajapati police had launched SHE project for providing protection to minor girls and women in distress, and Udaan project for imparting free defence training to youths.