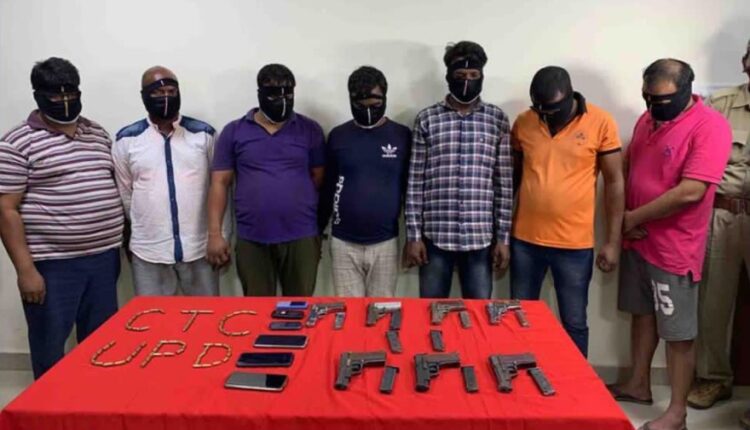 The CP said acting on a tip-off  that Bijay, a resident of Kendrapada district, along with Jaga (39) of Jagatsinghpur had come to Cuttack for trading of arms and ammunitions with a group of anti-socials, police conducted a raid and nabbed all of them when they  had assembled at Gurukhetra field near Kaliaboda mutt yesterday.

The four other accused are Pyarimohan Das alias Pintu, Tushar Khuntia alias Silu, Muktar Saha alias Bhalu and Srinath Rout.  All the seven accused belong to the Tito’s gang. They are involved criminal activities like murder, kidnapping, extortion, smuggling of arms and ammunitions in Kendrapada, Cuttack and Jagatsinghpur districts.

While 15 cases are pending against Jaga at different police stations, Bijay and Pintu are involved in 11 criminal cases each, the CP informed.

“It is ascertained the accused are more active now for clandestine supply and sale of fire arms and ammunitions to the criminals of Cuttack and other districts under the direction of Tito. The accused will be produced before court today. Further investigation is underway to uncover their involvement in some other cases which are under verification from other districts,” the senior cop said.