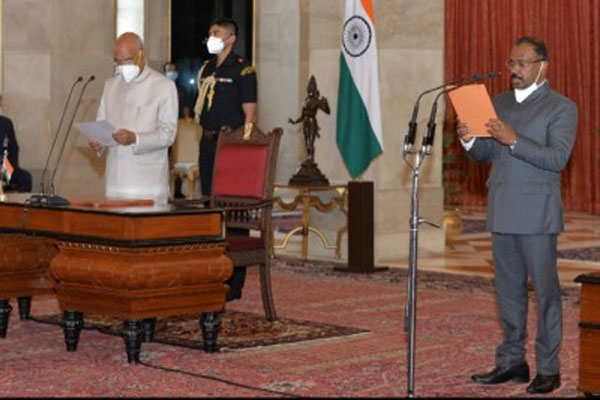 New Delhi: Former Jammu and Kashmir Lieutenant Governor Girish Chandra Murmu was on Saturday sworn in as the new Comptroller and Auditor General of India.

He took the oath of office before President Ram Nath Kovind at a ceremony held at the Rashtrapati Bhavan here at 10.30 am. Murmu’s tenure will be up to November 20, 2024.

Mehrishi, a former 1978-batch IAS officer of the Rajasthan cadre, had taken over as the CAG in September 2017.

Murmu resigned as the first Lieutenant Governor of Union Territory of Jammu and Kashmir on August 5, the first anniversary of the abrogation of Article 370 of the Indian Constitution.

Odisha-born bureaucrat sworn-in as first LG of Jammu and…

Murmu later went to the CAG office, where he was welcomed by senior officers of the Indian Audit and Accounts Department.

Murmu earlier had served on important posts in Gujarat as well. He has a wide experience in administrative, economic, and infrastructure fields.

A postgraduate in Political Science from Utkal University, Murmu also holds an MBA degree from the University of Birmingham.

Murmu was born on November 21, 1959, in the Mayurbhanj district of Odisha. He is married to Dr. Smita Murmu. The couple has a daughter, Ruchika Murmu, and a son, Ruhaan Murmu.