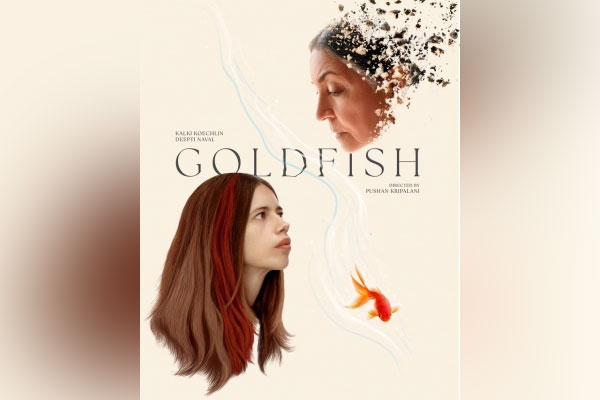 Mumbai: ‘Goldfish’, a film which deals with dementia, and stars senior actress Deepti Naval, ‘Dev. D’ star Kalki Koechlin and Rajit Kapur, is set to have its world market premiere at the 75th Cannes Film Festival on May 21 and 22 at the French Riviera town.

Set in London, the film is the first international collaboration between Deepti and Kalki.

Commenting on the occasion, Deepti Naval shared a deeply personal anecdote from her life in a statement, “As an actor you wait for films that will change something inside. For me, ‘Goldfish’ is one such role. I connected immediately with the film when I heard the story of the film in three lines. Something inside me said, this is for me, this is what you have been waiting for me. Maybe because I saw my mother go through Alzheimer’s and Dementia.”

The film has been directed by cinematographer and theatre director Pushan Kriplani, with Amit Saxena’s Splendid Films (USA) producing the film and Pooja Chauhan serving as the executive producer.

Kalki spoke about the post-Covid world and the emotional upheaval that it entails, “What home means. In a post-COVID world where a lot of people were forced into their homes with their loved ones, there was so much physical stillness, yet there was this emotional torment that was anything but still.”

She further said, “That’s something the film speaks to. The other thing that stood out for me in the film is how the film’s cast included Indians from all over the world and all these actors had their own accents that is something we’ve never seen in a film – the diversity of Indian accents and therefore of the people of India.”

Explaining the idea of his film, director Pushan Kripalani added, “‘Goldfish’ explores the ideas of identity through two women. One unsure of who she is because she lives between two cultures, neither completely her own, and the other, stuck in a land not her own, now because of her disease, with her identity ephemeral. It seeks to address the ideas of duty, love and painful history.”