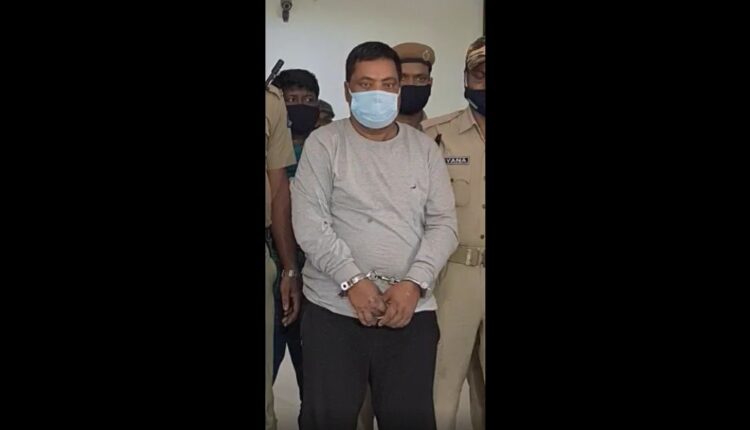 Bhubaneswar: Gangster Sheikh Hyder Alli had snatched an AK-47 gun from a cop and threatened the policemen of the escort party to kill them, before being shot in a police encounter on July 24, revealed an FIR lodged by a police official with Simulia police.

As the FIR filed by Police Inspector Gangadhar Saseni, who was escorting Hyder along with other cops on that day from Choudwar Circle Jail in Cuttack to Baripada Circle Jail, the gangster was handcuffed during the shifting.

Hyder told Saseni to stop the police vehicle near Simulia at around 3.20 PM for attending nature’s call. Though the cops dissuaded him, Hyder told them that he was suffering from acute diabetes, for which he was experiencing uncontrollable urge to void. The vehicle stopped at a diversion point near a temple at Simulia.

As Hyder and the escort party got down from the vehicle, he requested them to unlock the handcuff to attend nature’s call and wash hands thereafter.

As soon as a havildar unlocked the handcuff, Hyder snatched away the AK-47 rifle from the cop’s possession, aimed the gun towards the escort party and threatened the policemen to kill them.

“Ek baar main farar hua tha, tum police wale mujhe Hyderabad se pakad liye. Iss baar main farar hunga, koi police mujhe pakad nahi sakega. Koi mujhe pakadne ke liye aage badhega toh goli maar dunga (I had once escaped from police custody but was caught in Hyderabad. I will escape today and no one can catch me. If anyone advances to nab me, I will shoot,” threatened Hyder, as per the FIR lodged by the police official.

Saseni and SI Asit Jena then warned Hyder to surrender before police, which had little impact on the gangster. There was reasonable apprehension of death/grievous injury of the escort party members as Hyder was desperate to open fire to kill them. In exercise of the right to private defense and to save the life of police personnel from imminent danger of death, SI Jena fired three rounds of bullets from his service pistol to stop Hyder.

Jena took all precautions to resort to controlled firing to hit the lower part of Hyder’s body below the waist to immobilize him and prevent him from opening fire. The bullets hit the left side upper arm and body of Hyder as he bent down suddenly to open fire towards the police, Saseni mentioned in the FIR.

Hyder sustained bullet injuries and was rescued by the cops. He was immediately shifted him to District Headquarters Hospital (DHH), Balasore. He breathed his last while undergoing treatment.

Also read– From A Rickshaw Puller To Gangster: Curtains Down On Hyder’s Rein In Crime World.