Groove with Battle Cypher in Bhubaneswar on Dec 17 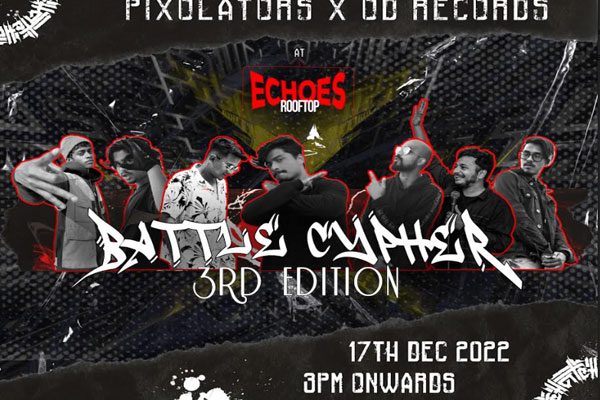 The year 2019 has seen a paradigm shift in the Indian music industry with the huge box office success of Gully boy. Courtesy this, the current generation, especially the younger populace have taken to hip-hop and rap like duck to water. This has resulted in a sudden boom in the number of hip-hop artists and audiences, especially in cities like Delhi and Dehradun (North), Mumbai (West) and Bangalore(South). But what about the hip-hop scene in the east? To be precise, Bhubaneswar, the capital city of Odisha?

Well, Odisha is not far behind in this aspect either. The year 2019 saw rapper Big Deal represent Odisha on national television, when he performed in the first season of MTV HUSTLE. Artists like GEN3SIS, who gave Odisha FC their official anthem and groups like Urban Utkal are doing a pivotal job in representing the state and city on a national level. This has shed light onto the rather overlooked state of hip-hop and rap in the state. Although it is a catching trend, it still hasn’t become a household name yet. However it holds the potential to be one. The east coast has not only variety but authentic and homegrown sound to it, which hasn’t been provided a proper platform to propel it to the heights that it deserves to be at.

In this regard, the collaborative initiative of OD RECORDS and PIXOLATORS, have made major waves by introducing BATTLE CYPHER BHUBANESWAR, an event purely dedicated to upliftment of hip-hop and battle rap culture in the east coast, by not just organizing on-ground events but also documenting and posting it across all social media, thus making it a rather significant part of hip-hop history in the state. After two successful official events, they are back with the 3rd edition, which promises to be much bigger, as it seeks to merge underground dance and rap, representing hip-hop at its unadulterated best. The event will consist of rappers going at each other in a battle where they aim lines at their opponents to prove who is the better lyricist and at the same time, it will feature dancers working their magic on the floor with their moves that is bound to leave the spectators spellbound.

So what are you waiting for? Come and witness the live hip hop history in Bhubaneswar, unfold itself on 17th of December, 2022 at the Echoes Restrobar (Rooftop).