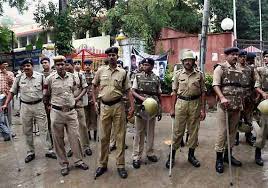 There were no reports of anyone being injured in the incident.

The two groups belonging Ara Sahi and Harijana Sahi here clashed with each other following a heated argument over offering ‘bhog’ during bullock festival on Saturday night which took a violent turn today.

According to reports, the agaitating members of the two groups pelted stones at each other and ransacked houses in the village.

“Several persons forcibly entered into our house and threatened us to leave the spot immediately. Timely intervention of police saved us,” said an elderly man with a choked voice.

Upon being informed, police rushed to the spot and brought the situation under control. The cops had to resort to lathicharge to disperse the irate locals.

“The situation is now under control and adequate policeman were deployed in the area to prevent any further flare up in the situation,” said Dhenkanal Additional SP Harekrushna Pradhan.

Worth mentioning, every year, thousands of devotees visit Bhuban to witness the age-old bullock festival on the day of Dussehra. Bullocks are decorated with colourful quills, beads and ornaments for the festival, which has become a must-visit for people in and around the district.

Python with tape wrapped around mouth rescued from canal in Baripada