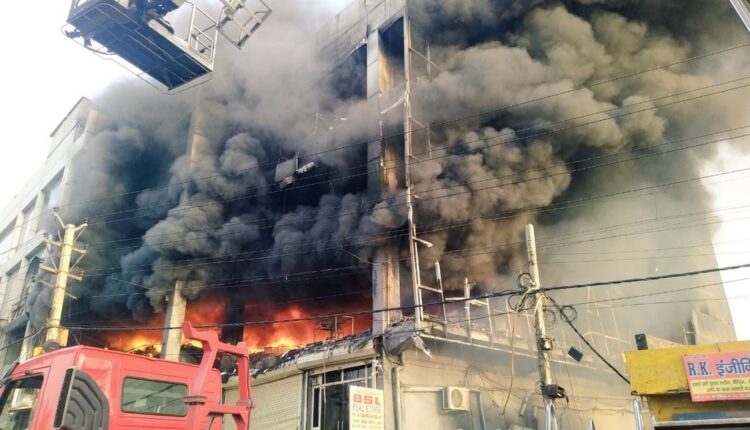 New Delhi: Delhi Chief Minister Arvind Kejriwal on Saturday arrived at the site of a massive inferno in Mundka that claimed the lives of 27 persons, saying that the “guilty won’t be spared”.

“It is a very unfortunate incident. I have ordered a magisterial enquiry. The guilty won’t be spared. Two brothers have been arrested so far,” the Chief Minister said.

He said that the kin of the deceased will be provided an ex-gratia relief of Rs 10 lakh each, while the injured will be given Rs 50,000 per person by the Delhi government.

“Whosoever is responsible for the incident, we will not spare anyone,” Kejriwal added.

When asked about the identification of the victims, the Chief Minister said that the process will be carried out after a DNA test.

“The bodies have been badly burnt. An FSL team has also been roped in to identify the bodies. I pray that god gives strength to the bereaved families to bear this unbearable agony,” he added.

Meanwhile, Deputy Commissioner of Police (Outer) Sameer Sharma said that the FIR has been registered under sections 304 (Punishment for culpable homicide not amounting to murder), 308 (Attempt to commit culpable homicide), 120 (Concealing design to commit offence punishable with imprisonment) and 34 (Acts done by several persons in furtherance of common intention) of the Indian Penal Code.

Most of the people were present on the second floor of the four-storey building at the time of the incident on Friday evening.

The fire first broke out on the first floor which housed a CCTV and router manufacturing company.

The police have arrested the owners of that company, identified as Harish Goel and Varun Goelm and their antecedents are being examined, the senior police official said.

The building’s owner, Manish Lakra who used to reside on the top floor, has gone absconding.

“His whereabouts are still unknown,” the official said, adding searches are on to nab him.