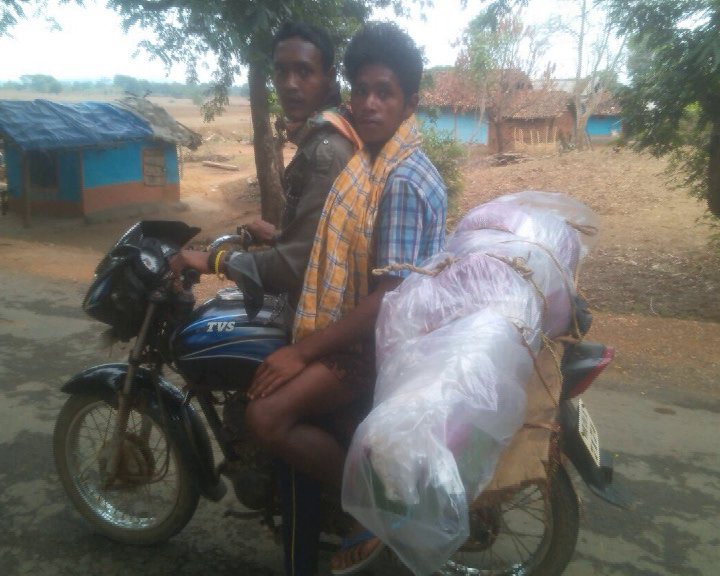 In the absence of hearse in a majority of government hospitals in Odisha’s Nabarangpur district, the poor have to often carry their dead on motorbikes.

In one such incident, family members who did not have enough money to hire a vehicle carried the body of a deceased relative on a motorbike to their village Bharuamunda in Chaklapadar panchayat which is 30 kilometers away from the Jharigan Community Health Centre (CHC).

Two youth tied the corpse wrapped in a polythene sheet to their motorbike and drove all the way to their village.

The incident has caused severe resentment among the locals.

According to sources, on Tuesday morning, Makarand Pujari of Bharuamunda village along with his family members had gone for fishing.

His younger sister Chamari Jani had, however, stayed back at home.

On their return on not finding Chamari at home, after frantic search family members found her body hanging from a tree at a distance of one kilometer from their home.

After inquest by the police, in the absence of a proper vehicle, Makarand’s family members had to carry Chamari’s body on a bike to Jharigan CHC for post-mortem. Since it was already evening, the post-mortem on the body couldn’t be conducted.

The CHC authorities after conducting post-mortem in the morning the next day handed over Chamari’s body to her family members who carried it back to their village on the motorbike.

Such instances are not new in Nabarangpur district. Prior to this body of farmer Arjun Chalan, who had committed suicide was brought to Jharigan CHC on a motorbike by his family members for post-mortem.

Surprisingly, none of the government hospitals in Raighar, Jharigan, Dabugan and Chandahandi blocks in Nabarangpur district have hearses. As a result of which poor people not having enough money to hire vehicles often carry their dead for post-mortem and after that to their village on motorbikes.

Lately, the government hospital at Umerkote has been provided with a hearse.