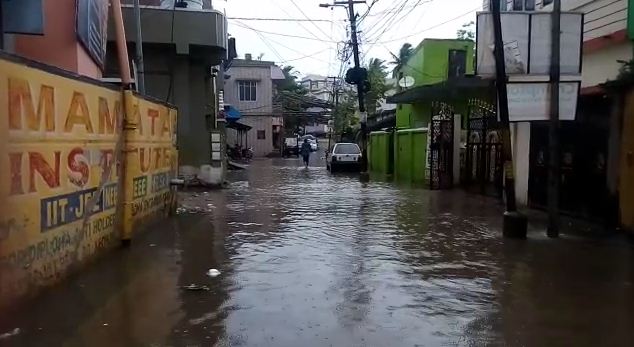 Bhubaneswar: Heavy rainfall triggered by a depression over Bay of Bengal has lashed several parts of Odisha during the last 24 hours.

The system has concentrated into a deep depression and likely to weaken gradually into a well marked low pressure during next 24 hours. Under its impact, heavy downpour would continue in districts of north, south and interior Odisha during the next 24 hours.

Squally winds speed reaching 40-­50 kmph gusting to 60 kmph very likely along & off Odisha coast. Rough to very rough sea conditions are likely to prevail over north Bay of Bengal off Odisha coast, for which fishermen have been advised not to venture into sea.

Local cautionary signal number-3 has been hoisted at all ports in Odisha.

A total of 44 blocks in the state have received more than 100 mm of rainfall with Erasama block in Jagatsinghpur district receiving the highest of 435 mm.

As many as 130 pump sets are being used by the Cuttack Municipal Corporation for draining out water from low lying areas in Cuttack city.

Similarly, the Bhubaneswar Municipal Corporation has geared up to tackle posible water logging situation in the capital city. The civic body is prepared with a multi-agency 24×7 control room comprising people from Water Resource Department and Public Health Engineering Organisation.

As many as 13 teams across 13 sub-zones have been deployed to monitor the situation across the city in 67 wards. BMC’s 40 engineers are on high alert to manage any kind of situation due to high rainfall.