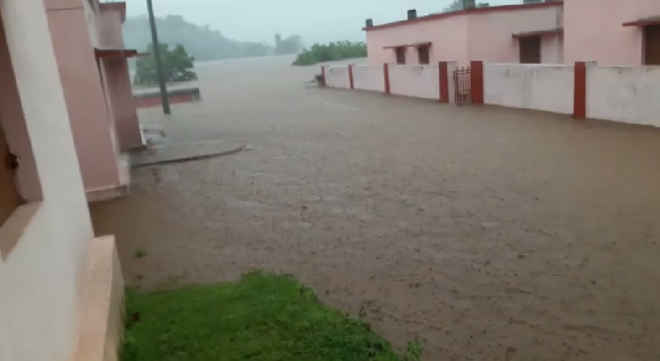 Rayagada: Heavy rains have triggered flash floods in parts of Rayagada and Kalahandi districts in Odisha.

Due to continuous rains the water level of Nagabali and Kalyani Rivers rose and many places of Kalyansinghpur block in Rayagada district and Kalahandi district have been marooned in rain water.

Three bridges swept away in the floods in Kalyansinghpur. The flood water over 8-9 feet high was flowing on the roads in many areas.

Tehsil office, Sana Brahmani and Bada Brahmani road, Kampor road have been submerged. Around a hundred villages have been affected in the flash floods, said Tehsildar Goura Chandra Patnaik.

After the flood water entered the ground floor of Buguda Ashram School, the inmates have taken shelter on the roof. The water level on the rivers is expected to rise further due to continuous rains since Saturday.

The road communication between Rayagada and Bhawanipatna has been affected. Kalayanshinghpur block has been cut off from other areas as the flood water is flowing on the roads. A CRPF team reached the area to rescue people affected by flash floods.

Heavy rainfall also created havoc in many places in Kalahandi district. The water level of Hati River rose above its danger mark and flood water is flowing on bridges and roads cutting off communication to Nabarangpur, Nuapada and Kalahandi district headquarters Bhawanipatna.