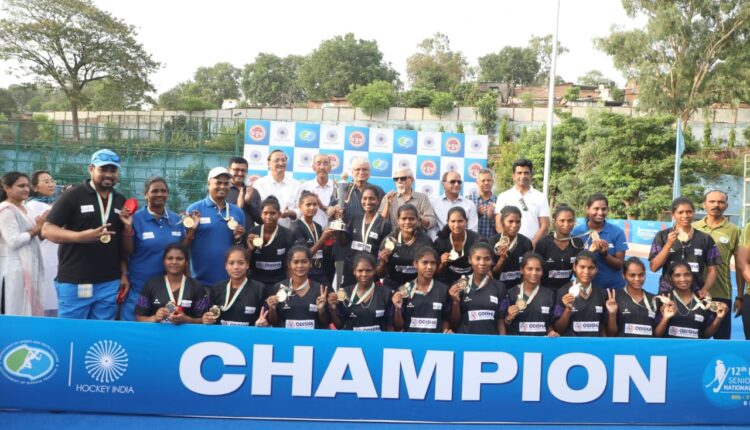 Bhopal: The Hockey Association of Odisha was crowned as the Champions of the 12th Hockey India Senior Women National Championship 2022 in Bhopal, Madhya Pradesh with a thrilling 2-0 victory over the Hockey Karnataka in the final.

The final match was a closely contested affair between the Hockey Karnataka and the Hockey Association of Odisha. Both the teams started well, as they created several goal-scoring opportunities. However, solid defensive performances from both the sides ensured that the match went into the halftime with the scoreline reading 0-0.

Expressing his delight after the title win the Hockey Association of Odisha’s Head Coach Edgar Joseph Mascarenhas said, “We did not take the Hockey Karnataka lightly. Even though we missed a couple of chances, we played well and had a lot of ball possession which was our game plan. We dominated the ball in midfield. We scored a goal in the third quarter to put them under pressure and then we closed the game with a late goal.”

He also credited the senior players in the team for holding the team together in crucial situations. “We had set ourselves very positively coming into this tournament. We practiced really hard, twice a day during the hot days. We played to our strengths throughout the entire tournament. The senior players really held the team together and our goalkeeper played magnificently on the field,” he said.

The first game of the day saw the Hockey Haryana had a face off against the Hockey Jharkhand for the 3rd/4th place position. The thrilling contest saw Dipti Toppo (28′) open the scoring for the Hockey Jharkhand, followed by goals from Albela Rani Toppo (40′), and Betan Dungdung (43′).

Amandeep Kaur (55′) and Bharti Saroha (56′) scored a goal each for the Hockey Haryana to take the game to the wire, but the Hockey Jharkhand managed to pick a 3-2 win to earn a third-place finish in the competition.