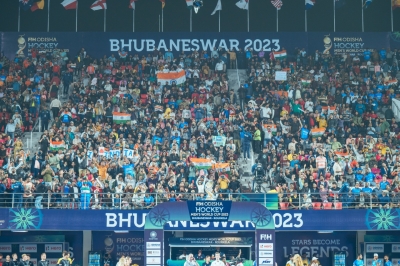 Bhubaneswar: With the passing of each day of the FIH Men’s Hockey World Cup 2023, the craze among the people of Odisha for the beautiful sport is touching new heights.

The iconic Kalinga Stadium was fully packed with hockey lovers from different parts of India to witness the important match between India and Wales. Hockey fans including women and children have enjoyed the wonderful match, in which India won with 4-2 goals against Wales.

Parents carrying their little one on their shoulders marched towards the stadium to witness the match. Many hockey fans from Punjab also watched the match. The entire atmosphere was so electrifying, not only the spectators, but also the police officials, volunteers and security staff also enjoyed the match while performing their duty inside the stadium.

During the third quarter, when Wales’ Jacob Draper had received a nasty cut to the cheekbone and was going off the field, the crowd in the stadium appreciated his play with claps.

Chief Minister Naveen Patnaik and Tamil Nadu Sports Minister Thiru Udhayanidhi Stalin interacted with the players of both the teams (Indian and Wales) before the match. They also watched the entire match.

“Watched a wonderful match of hockey between #INDvsWAL of #HWC2023 at the iconic #KalingaStadium. Impressed by the huge turnout of sports lovers and outpouring of love for the game. Best wishes to the Indian team for the upcoming matches,” Patnaik said in a tweet.

Similarly, Hockey India President Dilip Kumar Tirkey, on his twitter handle wrote, “With such an impressive turnout of hockey lovers & undying enthusiasm for the game, Bhubaneswar continues to be one of the best hosts of hockey.”

This was the first match in this World Cup Indian team played at the Kalinga Stadium. Now, the men in blue will have a crossover match with New Zealand to reach quarterfinals.

Union Budget 2023 might be presented in new Parliament building