Hottest planet ever known discovered; hotter than most stars 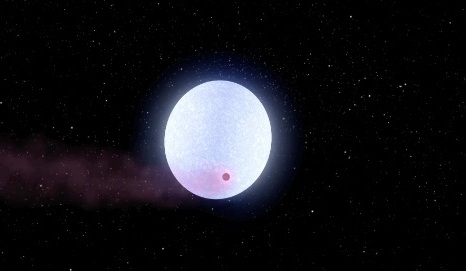 Astronomers have discovered the hottest planet ever known, with a dayside temperature of more than 4,300 degrees Celsius.

In fact, this planet, called KELT-9b, is hotter than most stars, according to a study published in the journal Nature.

“This is the hottest gas giant planet that has ever been discovered,” said Scott Gaudi, Professor at the Ohio State University in Columbus who led a study.

KELT-9b is 2.8 times more massive than Jupiter, but only half as dense.

It is nowhere close to habitable, but Gaudi said there is a good reason to study worlds that are unlivable in the extreme.

“As has been highlighted by the recent discoveries from the MEarth collaboration, the planet around Proxima Centauri, and the astonishing system discovered around TRAPPIST-1, the astronomical community is clearly focused on finding Earthlike planets around small, cooler stars like our sun,” Gaudi said.

“They are easy targets and there’s a lot that can be learned about potentially habitable planets orbiting very low-mass stars in general. On the other hand, because KELT-9b’s host star is bigger and hotter than the Sun, it complements those efforts and provides a kind of touchstone for understanding how planetary systems form around hot, massive stars,” he explained.

Because the planet is tidally locked to its star — as the moon is to Earth — one side of the planet is always facing toward the star, and one side is in perpetual darkness.

Molecules such as water, carbon dioxide and methane cannot form on the dayside because it is bombarded by too much ultraviolet radiation.

The properties of the nightside are still mysterious — molecules may be able to form there, but probably only temporarily.

“It’s a planet by any of the typical definitions of mass, but its atmosphere is almost certainly unlike any other planet we’ve ever seen just because of the temperature of its dayside,” said Gaudi, worked on this study while on sabbatical at NASA’s Jet Propulsion Laboratory, Pasadena, California.

Its star, called KELT-9, is even hotter — in fact, it is probably unravelling the planet through evaporation. It is only 300 million years old, which is young in star time.

It is more than twice as large, and nearly twice as hot, as our sun.

Given that the planet’s atmosphere is constantly blasted with high levels of ultraviolet radiation, the planet may even be shedding a tail of evaporated planetary material like a comet.

“KELT-9 radiates so much ultraviolet radiation that it may completely evaporate the planet,” said Keivan Stassun, Professor at Vanderbilt University, Nashville, Tennessee.

The KELT-9b planet was found using the Kilodegree Extremely Little Telescope, or KELT.