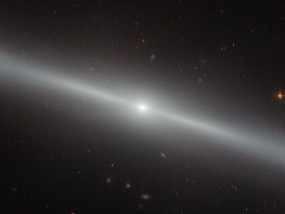 Washington: NASA’s Hubble space telescope has spotted a blistering hot planet outside our solar system where it “snows” sunscreen.

The planet, called Kepler-13Ab, circles very close to its host star, Kepler-13A, said the study published in the Astronomical Journal.

Kepler-13Ab, which is more than 1,730 light-years from Earth, is so close to its parent star that it is tidally locked. One side of the planet always faces the star and the other side is in permanent darkness.

The problem is the sunscreen — titanium oxide — precipitation only happens on the planet’s permanent nighttime side, leaving the sizzling hot, daytime side, without protection.

The astronomers believe that powerful winds carry the titanium oxide gas around to the colder nighttime side, where it condenses into crystalline flakes, forms clouds, and precipitates as snow.

Kepler-13Ab’s strong surface gravity — six times greater than Jupiter’s — pulls the titanium oxide snow out of the upper atmosphere and traps it in the lower atmosphere.

The observations confirm a theory from several years ago that this kind of precipitation could occur on massive, hot planets with powerful gravity.

“Presumably, this precipitation process is happening on most of the observed hot Jupiters, but those gas giants all have lower surface gravities than Kepler-13Ab,” said lead researcher Thomas Beatty of Pennsylvania State University in the US.

“The titanium oxide snow doesn’t fall far enough in those atmospheres, and then it gets swept back to the hotter dayside, revaporises, and returns to a gaseous state,” Beatty added.

Hubble made the observations as the distant world traveled behind its star, an event called a secondary eclipse.

This type of eclipse yields information on the temperature of the constituents in the atmosphere of the exoplanet’s dayside.
(IANS)

Make In Odisha campaign in Japan, Thailand from Oct 30

‘The Ministry of Utmost Happiness’ not for movie: Arundhati Roy