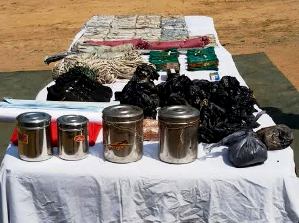 A huge cache of explosives and Maoist items were seized by BSF jawans at Parbeda-Pangiput forest near Lamtaput in Odisha’s Koraput district on Monday night.

During combing operation last night, the security forces recovered a bag which was buried underground, sources said. As many as 43 electric detonators, 19 gelatin sticks and 200 grams of gun powder were recovered from the bag, sources added.

This apart, Maoist dresses were found from the bag. Combing operation has been intensified in the area following the recovery of the explosives.