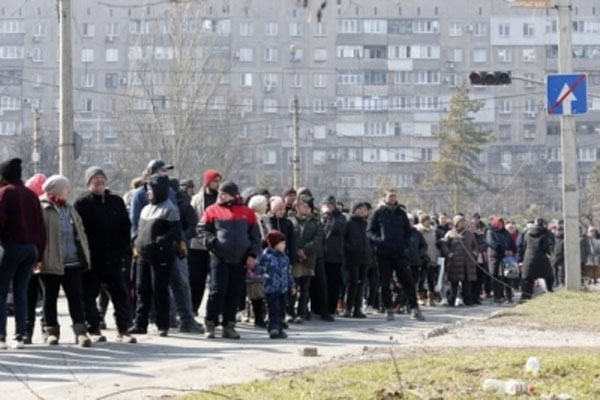 Kyiv: Ukraine’s Deputy Prime Minister Iryna Vereshchuk said that a humanitarian corridor for the evacuation of stranded civilians in the besieged city of Mariupol might operate on Saturday.

In a Facebook post late Friday night, Vereshchuk said: “Appeal to our civilians who are waiting for the evacuation from Mariupol.
There is a possibility that tomorrow we will be able to open a humanitarian corridor from Mariupol.”

The Minister said that evacuation buses will be collecting civilians at the roundabout in front of the Port-City shopping mall at 10 a.m. on Saturday.

“If everything is alright, I’ll give a confirmation. I am writing to you now so that you are somewhat prepared if in the morning we manage to agree on the corridor,” Vereshchuk added.

She recalled that humanitarian corridors from Mariupol have been disrupted on many occasions, but reiterated that “we have to try as many times as is necessary, until we succeed”.

On Thursday, evacuation buses with 79 Mariupol residents who left the besieged city the previous day arrived on territory controlled by the Ukrainian government.

Mariupol has been under siege since March 1, reports Ukrayinska Pravda.

On April 12, some of the Ukrainian Marines were able to break through from the Ilyich plant to the Azov Regiment at the Azovstal plant, and some were taken prisoner.

The Russian army continues dropping bombs on the Azovstal plant.

On April 19, Sviatoslav Palamar (Kalyna), Deputy Commander of the Azov Regiment, said that the Azovstal plant had been almost completely destroyed and that Ukrainian soldiers were trying to rescue people from under the rubble.

The Russian Defence Ministry asked Ukrainian defenders stationed at Azovstal to lay down their arms and surrender several times.

Russia wants to control Mariupol because of its strategic location which would ensure unimpeded land access from Donbas to Crimea.

IAEA chief to head mission to Chernobyl next week