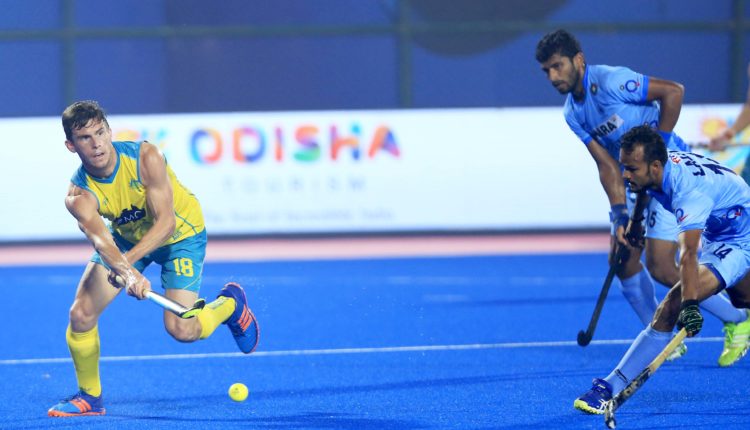 Mandeep Singh gave India the lead in the 20th minute but Jeremy Hayward successfully converted a penalty corner in the 21st minute to pull Australia level.

Australia earned as many as six penalty corners but could convert only one as the Indian defence stood tall.

India got three penalty corners — two after Mandeep’s goal but could not capitalise on them.

Akashdeep Singh came closest to making it 2-1 as a deflection hit the side-bar in the 51st minute.

Akashdeep could have given India the lead in the 17th minute as he met a crisp cross and with only the goalkeeper Tyler Lovell to beat but he ended up hitting the ball on to the onrushing Australian custodian.

But Mandeep gave India the lead three minutes later as he received a cross from Lalit Upadhyay from the right and employed a backhander which went past Lovell.

India got two penalty corners but Rupinder Pal Singh’s efforts were not good enough to trouble the Aussie defence.

Later, Australia enjoyed a good 10-15 minutes of possession as the visitors sent a lot of men forward to get into the lead. But they couldn’t turn their possession into a goal as the Indian young defenders responded well under pressure.

India got out of the phase of inactivity as they got a penalty corner in the 52nd minute. But Birendra Lakra mistrapped the push as the chance went a begging.

Australia tried to break the Indian defence but the latter was determined to earn a point from the match.

Sjoerd Marijne-coached India will meet England in their second match of Pool B on Saturday.

“We got several chances throughout the game to create goals. We will focus them to convert them into goals in next games,” Indian captain Manpreet Singh said after the draw.

Marijne said: “We put up an improved performance. We did really well as a team but we have to improve in some areas including converting penalty corners into goals.”

Earlier in the inaugural match on Friday, Germany defeated England 2-0 to start their campaign in a dominating fashion. Germany scored through Mats Grambusch (19th) and Christopher Ruhr (25th).(IANS)