In this Ravenshaw University PG dept, students sit on floor to attend classes 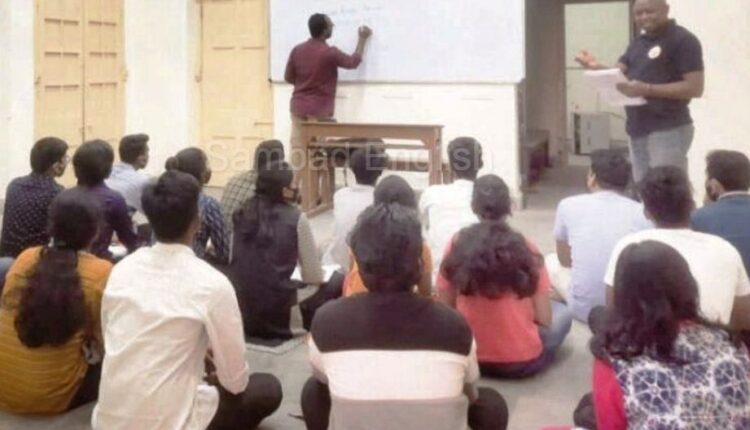 Cuttack: At a time when the Odisha Government is claiming significant improvement in the quality of education with the introduction of smart classrooms in schools, pictures from the iconic Ravenshaw University here narrate a totally different scenario.

As unbelievable as it may sound, students of Rural Development department of the prestigious university have to sit on floor for attending classes due to lack of desks and benches.

The situation has been prevailing since August, after resumption of offline classes. While the students have already drawn the attention of the concerned authorities towards the issue, it was yet to be resolved.

Worse, a student from Tanzania is among the first year students of the department, which is likely to malign the image of the university, internationally.

Earlier, classes of the Rural Development department were being held at two classrooms of the Economics department located at Commerce Block of the varsity. Later in January this year, it was shifted to a place near the Vice Chancellor’s office, where MBA department was functioning, previously.

While the desks and benches present at the place were shifted to the new building of the MBA department, the students of the Rural Development department were provided with old and broken furniture in an unusable condition.

As the university authorities didn’t resolve the problem despite the issue being raised by the students repeatedly, they had to sit on floor to attend the classes.

On being asked about the matter, PG Council Chairperson Prof. Dr. Asima Sahu said arrangements were being made for new desks and benches for the students.