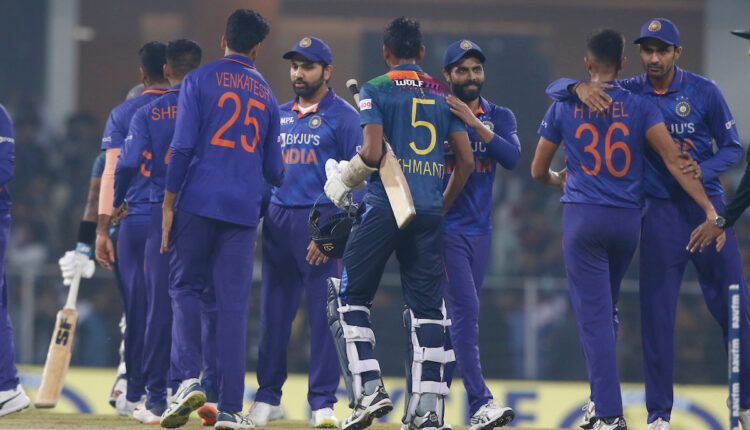 Lucknow: On the back of fifties from Ishan Kishan (89 off 56 balls) and Shreyas Iyer (57 not out off 28 balls), India’s bowling attack made the defence of 200 a walk in the park to register a 62-run win over Sri Lanka in the first T20I at the Bharat Ratna Shri Atal Bihari Vajpayee Ekana Cricket Stadium on Thursday.

In a win where only Ravindra Jadeja completed his quota of four overs, the pitch slowed down in the second innings. For Sri Lanka, the dew didn’t come to their rescue, eventually ending at just 137/6 in 20 overs, extending India’s winning streak in T20Is to ten matches.

India struck with a wicket on the very first ball as Pathum Nissanka played on to his stumps off Bhuvneshwar Kumar. The ball kept low and Nissanka, in a bid to defend, didn’t realise that the ball rolled on to hit the stumps. Kamil Mishara struck some boundaries and was even dropped by Venkatesh Iyer at mid-wicket. But two balls later, Kumar got Mishara to miscue a slog straight to mid-wicket.

Janith Liyanage’s struggling time at the crease came to an end when he tried to pull from outside the off-stump and got a top-edge flying to point. Ravindra Jadeja, returning from an injury lay-off, shortened his length and got one to turn and bounce away from an advancing Dinesh Chandimal, resulting in an easy stumping for Ishan Kishan.

Chamika Karunaratne hit two sixes but gave a thick edge behind to Kishan off Iyer.
Charith Asalanka was the lone ranger for Sri Lanka while Dushmantha Chameera took a six and two fours off Iyer to showcase his batting skills. Asalanka reached his fifty off 43 balls with a flick through mid-wicket and that was the lone bright spot for Sri Lanka in the series opener.

PM Modi speaks to Putin, appeals for cessation of violence