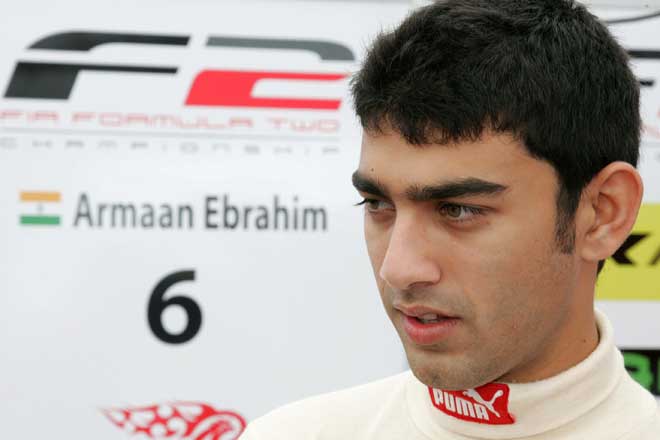 Armaan, spearheading Team FFF Racing, began in the sixth position in the first race on Sunday after struggling with the balance of the car during the qualifying round.

But he showed his skill and speed once again to climb his way up to the third position.

That’s when his troubles started. The overhead conditions changed suddenly and he was caught racing on slicks while the rain pelted and made the track slippery.

As if that was not enough, he had trouble with his radio and missed out on making his pit stop during the stipulated window, earning his teammate a drive through penalty, which pushed the team down to seventh place at the chequered flag.

In the crucial main race, Armaan’s teammate Jack Bartholomew from the United Kingdom, started the race seventh on the grid. By the time Armaan got into action again, it looked like he had no chance.

But the young Indian made the most of the out lap and the first flying to jump to fifth during the pit stop cycle. He gained two more positions in the rest of the race to finish third overall.

“I am happy with the way we tackled this weekend,” Armaan said.

“It’s great to finish on the podium, especially given all our woes today,” he added.

Armaan conceded that they have a lot of work to do on the car to reach their fastest and best speeds.

“I am sure that by the time we arrive in Thailand for the second round, my team would do the needful and we will come back stronger,” he said. (IANS)